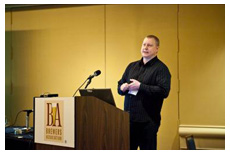 BOULDER, CO – Reinforcing its position as the leader in American craft beer promotion and education, the Brewers Association (BA) and its Export Development Subcommittee have selected Andreas F├ñlt to cover Europe as an American Craft Beer Ambassador within the BA’s Export Development Program (EDP).

With a strong knowledge of American craft beer and held in high regard by brewers and distributors alike, F├ñlt is charged with educating the beer community and media in Europe about the availability and quality of American craft beer. As an independent contractor, he will continue to serve as a consultant at Blue Yellow Media in the UK. He has previously held sales manager positions at Vertical Drinks, also in the UK, and Invicta Import and More Import in Sweden.

Globally, American craft beer exports increased 86 percent in 2011, with craft breweries exporting over 110,000 barrels of beer, valued at an estimated $23.4 million. The UK and Sweden are two of the top three largest international markets, with exports totaling approximately 13,065 barrels, and shipments to the Western European region increasing by 52 percent and surpassing 51,613 barrels.

The Brewers Association is the not-for-profit trade association dedicated to small and independent American brewers, their craft beers and the community of brewing enthusiasts. The Brewers Association (BA) represents more than 70 percent of the brewing industry, and its members make more than 99 percent of the beer brewed in the U.S. The BA organizes events including the World Beer Cup┬«, Great American Beer Festival┬«, Craft Brewers Conference and BrewExpo America┬«, SAVOR?: An American Craft Beer & Food Experience and American Craft Beer Week. The BA publishes The New Brewer magazine and its Brewers Publications division is the largest publisher of contemporary and relevant brewing literature for today’s craft brewers and homebrewers.