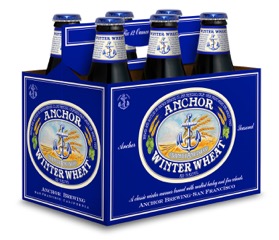 Anchor has been making wheat beers since the summer of 1984. They’ve all been golden summer refreshers instead of dark winter warmers – until now. Anchor Winter Wheat is made with a unique blend of malted barley and five wheats from Belgium, Germany, the Midwest, and a family farm just 75 miles away from Anchor Brewing in San Francisco where they get their soft red winter wheat. Sown in November and harvested in June, it is commonly used in artisanal flatbreads, cakes, and pastries.

“Anchor Winter Wheat was brewed to help everyone enjoy the winter season,” said Mark Carpenter, Brewmaster at Anchor Brewing. “Its deep color, complex malty flavor, and higher alcohol content make it a true winter warmer. When formulating Winter Wheat, I took the opportunity to create an interesting blend of five types of wheat. The result is a smooth, delicious beer with nutty, bread-like flavors that’s surprisingly light given its deep color. The beer has been a huge hit here at the brewery among the employees. It’s the perfect beer to enjoy by the fire or on the slope.”

In 1848, California farmers forsook their amber grain for golden fortune. By 1878, California wheat was back big-time, winning gold at the Paris International Exposition. There was even a wheat beer brewery in North Beach, one mile from Anchor’s first home. Today, the robust flavor, malty complexity, enticing aroma, ebony color, and thick creamy head of Anchor Winter Wheat reflect this delicious heritage.

Anchor Winter Wheat is available nationwide November through January in 6-packs, 22 oz. bottles, and on draught in select bars and restaurants including the Anchor Brewing Taproom in San Francisco.

Anchor Brewing Company’s roots date back to the California Gold Rush making it one of America’s oldest breweries. Its Anchor Steam® Beer is San Francisco’s original since 1896. In 1965, Fritz Maytag acquired and revived the struggling brewery at a time when mass production of beer dominated and seemed unstoppable. Maytag started a revolution in beer that originated today’s craft beer movement. An undisputed icon, Anchor is America’s first craft brewery where beers are handmade in our traditional copper brewhouse from an all-malt mash. At Anchor, we practice the time-honored art of classical brewing, employing state-of-the-art methods to ensure that our beers are always pure and fresh. We know of no brewery in the world that matches our efforts to combine traditional, natural brewing with such carefully applied, modern methods of sanitation, finishing, packaging and transporting. See what we are brewing today at www.anchorbrewing.com.