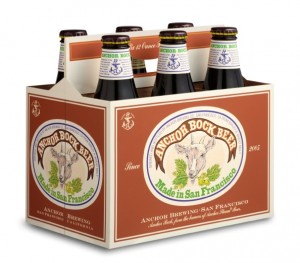 Each year, breweries in Germany celebrate the coming of spring with a strong, flavorful beer. Anchor Bock Beer, a dark satiny brew with rich hints of chocolate, caramel and roasted barley, is Anchor’s interpretation of this long-standing tradition.

Bock beers are believed to have originated in the town of Einbeck, Germany and traditionally feature a goat on the labels. The Germanic term “bock” translates to “billy goat”, but has over time come to mean a beer darker and stronger than a brewery’s “regular” brew. One with, you might say, the kick of a goat.

Anchor Brewing Company will be retiring Anchor Bock Beer in 2014 making room for several new seasonals yet to be announced.

“Anchor Bock has been a beloved seasonal not only by craft beer fans, but by the folks here at Anchor,” said Mark Carpenter, Brewmaster at Anchor Brewing Company. “In an effort to expand and innovate, as we have done for decades, Anchor will be retiring Bock after the 2014 season to allow room for several all-new brews, which we will be sharing with the world very soon.”

Anchor Brewing Company’s roots date back to the California gold rush making it one of America’s oldest breweries. Its Anchor Steam┬« Beer is San Francisco’s original since 1896. In 1965, Fritz Maytag acquired and revived the struggling brewery at a time when mass production of beer dominated and seemed unstoppable. Maytag started a revolution in beer that originated today’s craft beer movement. An undisputed icon, Anchor is America’s first craft brewery where beers are handmade in our traditional copper brewhouse from an all-malt mash. At Anchor, we practice the time-honored art of classical brewing, employing state-of-the-art methods to ensure that our beers are always pure and fresh. We know of no brewery in the world that matches our efforts to combine traditional, natural brewing with such carefully applied, modern methods of sanitation, finishing, packaging and transporting. See what we are brewing today at www.anchorbrewing.com.