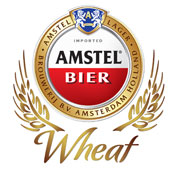 Last night, Amstel launched their newest offering, Amstel Wheat, in Boston — one of just seven territories across the U.S. that will feature the beer on draught before it officially rolls out to all domestic markets next February.

And despite recent reports from The Beverage Information Group that the overall beer category was down a total of 1.9 percent in case sales, the decision comes at a time when the wheat category is enjoying a growth rate of 25 percent.

Amstel will look to grab market share from from AB-InBev and MillerCoors offerings that are currently leading the category.

“We are competing with the major wheat beers,” said Heineken USA Brand Manager Belen Pamukoff. “Blue Moon, Shock Top and Hoegarden are all brands we will compete with.”

But it’s how Amstel plans to take its slice of the action that differs from category leader Blue Moon.

“We are going to be a draught-focused beer,” said Pamukoff. “We won’t even begin offering Wheat in bottles until September of 2012.”

If this strategy pays off, Amstel could be reaping the rewards. Blue Moon and Shock Top white ales are currently the number 2 and 3 specialty 12 packs sold, with nearly 300,000 combined cases sold to date*.

Currently, Amstel’s only other offering in the U.S. is their Light, down 12.1 percent (YTD)*, at U.S. supermarkets – which may help explain the move into the wheat category.

The Amstel Wheat offering checks in at 4.5% ABV and 11 IBU’s. The company said pricing will be in line with other upscale imports already being offered domestically.

*Based on the most current IRI data from August.