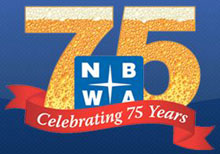 ALEXANDRIA, VA — America’s 3,300 licensed beer distributors will celebrate the excitement that craft beer brings to the beer industry during American Craft Beer Week, May 13-19, 2013, a national celebration highlighting the culture and contributions of craft beer and the 2,400 craft breweries across the United States.

“It’s hard to believe that there were only 40 some breweries in the U.S. in the 1980s, and yet today there are 2,400! America’s beer distributors are proud to partner with America’s craft brewers and serve as the vehicle to market for their brands,” said Craig Purser, president & CEO of the National Beer Wholesalers Association (NBWA). “Because of today’s effective system of alcohol distribution, American consumers have the greatest choice and variety of beer available in the world.”

“American Craft Beer Week is a great opportunity to recognize the unparalleled number of styles, varieties and flavors of beer —13,000 different labels — available in the marketplace today. This diversity is due in large part to the effectiveness of the American system of state-based alcohol regulation which provides a level playing field for brewers working to grow and get established,” continued Purser. “American Craft Beer Week is also a great time to nominate a beer distributor for the Seventh Annual Craft Beer Distributor of the Year Award, which honors the beer distributor that does the most to market, promote and sell craft beer.”

For more information about American Craft Beer Week, including celebratory events in your area, visit www.craftbeer.com/pages/news-and-events/american-craft-beer-week.

The National Beer Wholesalers Association (NBWA) represents the interests of America’s 3,300 licensed, independent beer distributor operations in every state, congressional district and media market across the country. Beer distributors are committed to ensuring alcohol is provided safely and responsibly to consumers of legal drinking age through the three-tier, state-based system of alcohol regulation and distribution. To learn more about America’s beer distributors, visit www.AmericasBeerDistributors.com. For additional updates from NBWA, follow @MrBeerGuy on Twitter and visit www.facebook.com/Mr.BeerGuy.