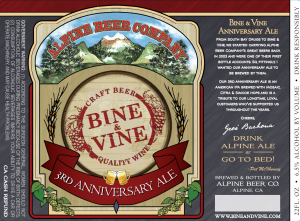 The beer is scheduled to be bottled this later this week with a release date of sometime next week. Bottles will be available EXCLUSIVELY at Bine & Vine Bottle Shop.

“From South Bay Drugs to Bine & Vine, we started carrying Alpine Beer Company’s great beers back in 2003 and were one of their first bottle accounts. So, fittingly, I wanted our Anniversary Ale to be brewed by them. Our 3rd Anniversary Ale is an American IPA brewed with Mosaic, Citra & Simcoe hops and is a tribute to our longtime, loyal customers who have supported us throughout the years.

Refrigerate at all times! Drink as fresh as possible! Don’t age!