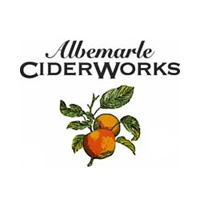 Albemarle Ciderworks is a family owned Virginia farm winery in its third year, dedicated to crafting a carefully fermented cider from the distinctive apple varieties the Shelton family grows. The CiderWorks produced 2400 cases of artisanal apple cider this year. Albemarle CiderWorks grew out of the Shelton family’s Vintage Virginia Apples, an enterprise dedicated to preserving and growing distinctively flavored and heirloom apples. That collection includes some 250 varieties, many grown exclusively for cider, on the family farm located 10 miles south of Charlottesville. The cider is available by the glass or bottle at many restaurants as well as in specialty markets and stores in the area.

The Albemarle CiderWorks tasting room is located on Route 29 South at 2545 Rural Ridge Lane, North Garden, VA 22959. Visitors can sample the ciders Wednesdays through Sundays, 11 am to 5 pm year round. The Tasting Room also features occasional music and events.