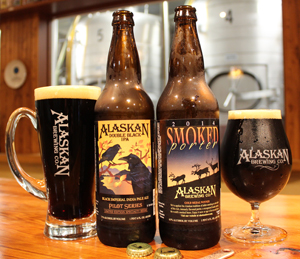 JUNEAU, Alaska — It’s coming just as sure as the days are getting shorter — Black Friday will soon be upon us, and Alaskan Brewing is recommending three new releases to combat the craziness. With the release of Double Black IPA, 2014 Smoked Porter, and the Smoked Porter Vintage Pack, Alaskan gives craft beer fans dark beers for the dark winter nights ahead.

Double Black IPA is part of the Alaskan Pilot Series — bigger beers offered in bigger bottles with bigger tastes. The aroma of Alaskan Double Black IPA consists of fresh, citrus notes from Northwest hops and the heavy, dry bouquet of roasted grains. Brewed with an array of dark malts, Alaskan Double Black IPA features the distinctive flavors of coffee and bitter chocolate with a subtle toasted sweetness. Large hop additions late in the boil, and dry-hopping after fermentation, lighten and refresh the overall perception and flavor of the beer. It finishes with a dry palate and lingering warmth and bitterness.

This month also marks the annual release of Alaskan’s vaunted Smoked Porter. This 2014 vintage has big shoes to fill, as this is the most awarded beer in the history of the Great American Beer Festival, with 21 awards to its name. It most recently won a bronze this year in the smoked beer category for the 2013 vintage. Our Smoked Porter is made by smoking malts over alder wood in a smoker that was originally used for salmon. These malts combined with the deep rich porter used as the base beer, bring forward in the aroma and flavor notes of bacon, campfire and roasted malt.

The third black beer offering is the Smoked Porter Vintage Pack — with bottles of the 2013 and 2008 vintages together with two Smoked Porter tasting glasses. Alaskan Smoked Porter ages gracefully as the smoke acts as a preservative for the beer. The result through the years is that the smoke recedes, and flavors of black currant, sherry, chocolate and vanilla start to come to the fore. The depth of flavors change through the years, and vertical tastings have become part of an Alaskan tradition that is especially enjoyable during the holidays.

These three black beers for Black Friday are sure to brighten your holidays. They are all available in 22 oz. bottles, but they are limited edition so supplies may not last. Best to stock up for the long winter months ahead.

Learn more about where to find Alaskan Brewing products by using the online Brewfinder at alaskanbeer.com.

Visit www.alaskanbeer.com to learn more and connect with Alaskan at Facebook.com/AlaskanBrewingCo and @AlaskanBrewing on Twitter and Instagram.