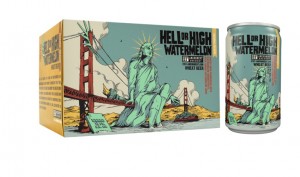 San Francisco, CA — Baseball is here again, the flip flops and shorts are out and 21st Amendment’s favorite summer brew Hell or High Watermelon Wheat is back. Co-Founders Shaun O’Sullivan and Nico Freccia proudly believe that in the pursuit of fresh and innovative beer there is no obstacle too great, no journey too long and no fruit too gigantic. An American wheat beer brewed with real watermelon makes this a surprisingly crisp, dry and refreshing beer with just a hint of watermelon aroma. Truly summer in a can.

“From the day we put Hell or High Watermelon on tap at our San Francisco pub thirteen years ago it has been the favorite and best-selling summertime brew,” said Freccia. “This beer is loved and admired across all types of beer drinkers—from people who don’t like beer to big burly guys that drink Imperial IPAs and stouts.”

“Our watermelon beer in many ways defines who we are. We like to do things a bit differently, with a twist and have fun doing it,” added O’Sullivan. “I mean we start this season every year with the ceremonial tossing of the watermelons from the roof of our pub. How cool is that? It’s also the quintessential beer to have in a can, as it’s perfect for summertime activities, ballparks, BBQs, beaches, boats and golf courses. With many of our beers I suggest pouring it out of the can into the proper glassware, but with Hell or High Watermelon you should enjoy it directly out of the can. It’s the perfect beer for doing just that.”

In 2000, Freccia and O’Sullivan opened the doors to the 21st Amendment brewpub in San Francisco’s historic South Park neighborhood with Freccia managing the restaurant and O’Sullivan spearheading the brewing process. In addition to quickly becoming one of the city’s favorite pubs, 21st Amendment began expanding beyond the Bay Area by helping to pioneer the movement to canned craft beer. Known for their witty names and delicious brews, 21st Amendment offers three year round selections, as well as seasonal offerings and their infamous ‘Insurrection Series’, a once-in-a-while limited edition release. Today, 21st Amendment is among the top 50 craft beer brewers in America and is sold in 17 states.