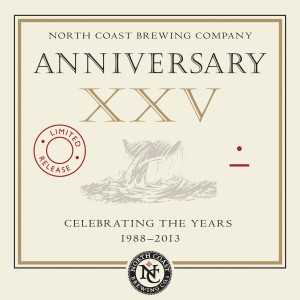 Fort Bragg, CA — In anticipation of long nights of celebration with the many friends we’ve made over the last 25 years, the brewers of North Coast have created a Belgian inspired session beer designed to promote a festive mood while minimizing the consequences of overindulgence.

Brewed with pale malts and fermented with the same yeast strain used to make Le Merle, our Twenty-fifth Anniversary Ale is sharp and spritzy with a delicious flowery, spicy dry-hop aroma.

This limited offering (4% ABV) is available on tap at fine restaurants and drinking establishments. 750 ml bottles will be available at the Brewery Taproom and the Brewery Shop in Fort Bragg, California.