As part of its annual report on the state of the U.S. craft beer industry, the Brewers Association (BA) — a trade group representing small and independent brewers — indicated that U.S. craft beer volumes reached an all-time high last year.

With 2012 production swelling past 13.2 million barrels — a 15 percent increase from 2011 — craft sales grew by 17 percent, taking total retail revenues for the category up to an estimated $10.2 billion.

“Beer is a $99 billion industry to which craft brewers are making a significant contribution, with retail sales share hitting double-digits for the first time in 2012,” BA director Paul Gatza said in a press release.

Craft beer sales have been steadily increasing since 2005, when 1,394 breweries made just 6.3 million barrels. Fast forward eight years, and nearly 1,000 new breweries have opened their doors, helping to more than double the industry’s total production of craft beer. In the last two years alone, 684 new breweries have launched, while only 80 have shut their doors, according to the BA.

“On average, we are seeing slightly more than one craft brewery per day opening somewhere in the U.S. and we anticipate even more in the coming year,” Gatza said.

But the BA definition of “craft ” only includes those brewers who produce less than 6 million barrels annually and are less than 25 percent owned by another non-craft brewer. That means production from Craft Brew Alliance (which markets the Kona, Redhook and Widmer Brothers brands), Goose Island, Magic Hat and Pyramid goes unaccounted for. The BA definition also excludes production from the independently-owned D.G. Yuengling & Son, which produced over 2.5 million barrels in 2012, and so-called “crafty” brews like Shock Top (owned by Anheuser-Busch InBev) and Blue Moon (owned by MillerCoors). Collectively, more than 6 million barrels of what many believe is better quality beer than most domestic premium offerings is left unaccounted for.

Included below is the complete BA press release which further details the growth of craft beer in 2012.

“Beer is a $99 billion industry to which craft brewers are making a significant contribution, with retail sales share hitting double digits for the first time in 2012,” said Paul Gatza, director, Brewers Association. “Small and independent brewers are consistently innovating and producing high quality, flavor-forward craft brewed beer. Americans are not only responding to greater access to these products, but also to the stories and people behind them.”

In 2012, there was an 18 percent increase in the number of U.S. operating breweries, with the total count reaching 2,403. This count includes 409 new brewery openings and only 43 closings. Small breweries created an estimated 4,857 more jobs during the year, employing 108,440 workers, compared to 103,583 the year prior.

“On average, we are seeing slightly more than one craft brewery per day opening somewhere in the U.S. and we anticipate even more in the coming year. There is clearly a thirst in the marketplace for craft brewed beer, as indicated by the continued growth year after year,” added Gatza. “These small breweries are doing great things for their local communities, the greater community of craft brewers, our food arts culture and the overall economy.” 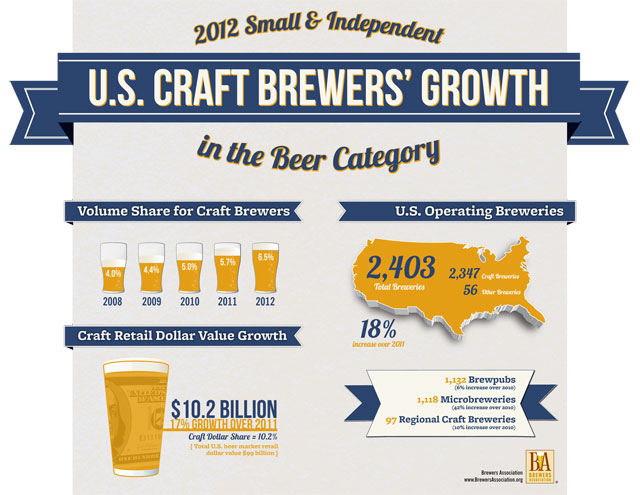 Note: Numbers are preliminary. A more extensive analysis will be released during the Craft Brewers Conference in Washington, D.C. from March 26-29. The full 2012 industry analysis will be published in the May/June 2013 issue of The New Brewer, highlighting regional trends and sales by individual breweries.

1 The definition of a craft brewer as stated by the Brewers Association: An American craft brewer is small, independent, and traditional. Small: Annual production of beer less than 6 million barrels. Beer production is attributed to a brewer according to the rules of alternating proprietorships. Flavored malt beverages are not considered beer for purposes of this definition. Independent: Less than 25 percent of the craft brewery is owned or controlled (or equivalent economic interest) by an alcoholic beverage industry member who is not themselves a craft brewer. Traditional: A brewer who has either an all malt flagship (the beer which represents the greatest volume among that brewers brands) or has at least 50 percent of its volume in either all malt beers or in beers which use adjuncts to enhance rather than lighten flavor.