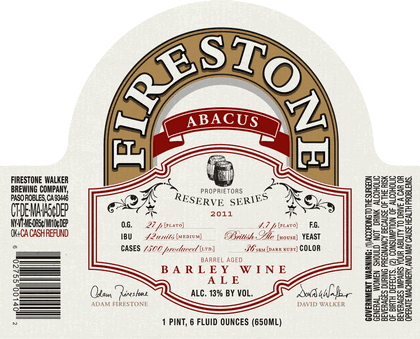 Abacus has long been a component of Firestone’s anniversary beers.  These anniversary beers are a blend of barrel-aged beers released one time each year in very limited quantities.  Over the past few years the individual component beers have been available on draft only and have generated quite a cult following. Abacus garners a 99 out of 100 on ratebeer.com and is listed in Beer Advocates top beers.

This complex rich high alcohol beer has been aged in 20-year-old Heaven’s Hill Bourbon Barrels to make this beer one of Firestone Walker’s greatest beers to date. And Firestone’s Brewmaster, Matt Brynildson, agrees.

“Abacus is the most elegant of the beers that we produce in our barrel-aged program,” Brynildson said. “This New World barley wine brings together some of the very best elements of the wine, spirits and brewing world.  14 months in barrel results in amazing flavor development and integration.  The Abacus project has been 5 years in the making and the brewing team and I and incredibly excited to finally share this beer in a bottle format with our fans.”

Abacus will be available in 22oz bottles and limited draft to a select number of accounts in the following areas: California, Arizona, Nevada, Oregon, Washington, Missouri, Chicago, New Jersey, New York, Virginia and Chicago throughout March.  Only 1500 cases of this vintage beer will be produced in 2011.