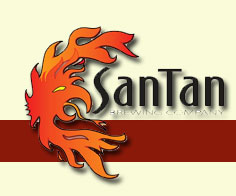 Since their release in Summer 2010, the canned SanTan brews have been extremely popular with beer aficionados. The new SanTan mixed 12-packs will be available year-round at select retail locations in Arizona serviced by Crescent Crown Distributing. Distribution is expected to expand throughout the year.

SanTan Hefeweizen is a traditional German Wheat beer brewed with a very distinctive strain of wheat yeast that gives it an unmistakably strong banana-clove flavor and aroma. Hefeweizen is an un-filtered beer, which gives the recognizably hazy gold appearance. Hefeweizen pairs well with lighter foods like seafood and salads.

SanTan Brewing Company, located in Historic Downtown Chandler (Ariz.), was founded in 2007 by Anthony Canecchia, a 15-year veteran of the beer brewing industry. The company has evolved from a humble microbrewer into a big player in the Arizona craft beer scene, becoming a local landmark for craft beer and food enthusiasts. The company aims to be the premier microbrewery in the Phoenix metro area, brewing and distributing high-quality, flavorful draft beers.