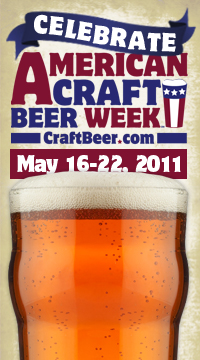 Considered The Mother of All Beer Weeks, ACBW recognizes one of America's true culinary arts and provides a platform for small and independent craft brewers to salute supporters and connect with their local communities. Thousands of today's beer enthusiasts, beginners and hard core geeks will toast craft beer, with ACBW events predicted to take place in all 50 states.

"American Craft Beer Week is an annual celebration of these historic beer times and the amazing community citizenship of craft brewers," said Julia Herz, a spokesperson for the Brewers Association. "With an emphasis to savor the flavor responsibly and the resurgence of a rich brewing culture here in the U.S., the week is a chance to highlight and recognize the incredible contributions of America's craft brewers."

There are close to 30 local beer weeks/beer months in the U.S. annually, each with its own identity and organizer. Established in 2006, ACBW builds on these local celebrations and is the largest national effort focusing solely on American craft brewers. Economically, small and independent U.S. craft brewers contribute an estimated 100,000 jobs, accounting for $3 billon annually in wages and benefits.

In 2010, ACBW logged 341 participating breweries that hosted 621 events with recognition at multiple retailers in 45 states. In addition, U.S. Congress passed House of Resolution 1297 to support the goals and ideals of ACBW and recognize the significant contributions of craft brewers to the economy.

Throughout the week, a variety of events will be hosted by craft brewers and beer retailers across the country. Mirroring the diverse styles and brands of the industry, events include charity fundraisers, new beer releases, brewery openings, festivals, unique craft beer dinners and special brewery tours. Additionally, participating breweries will once again encourage beer enthusiasts to sign the Declaration of Independence, an official document to support America's small and independent craft brewers.

For an ever-expanding list of events visit the official calendar on CraftBeer.com.