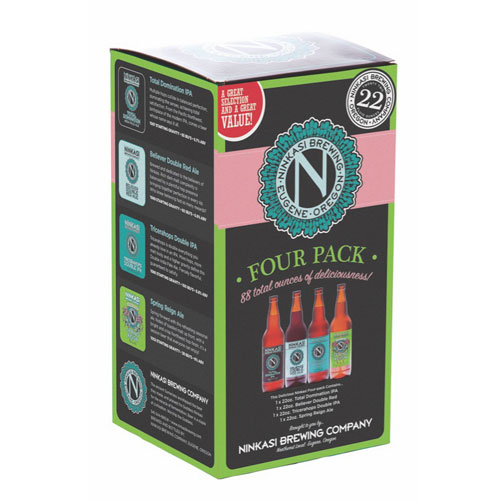 EUGENE, OR • Coming soon to a store beer section near you is Ninkasi’s latest release – a new Mixed Spring 4-Pack. Consisting of four 22- ounce favorites, the 4-Pack gives the Ninkasi faithful (and new fans) early access to Ninkasi’s seasonal Spring Reign Ale. Other selections of Ninkasi nirvana included in the 4-pack are Total Domination IPA, Believer Double Red, and Tricerahops Double IPA.
Ninkasi’s Mixed Spring 4-Pack is sold in fine retail establishments throughout the lucky states of Oregon, Washington, Idaho, Alaska and California. The Eugene, Oregon brewery is rated as one of the fastest growing breweries in the U.S. We’ll toast to that.
Ninkasi Brewing Company is located in Eugene, Oregon and has been brewing high quality beers in the Northwest style since 2006. Our location gives us access to some of the highest quality brewing ingredients in the world, including pure Cascade mountain water from the McKenzie River, and exceptional hops from the Pacific Northwest.