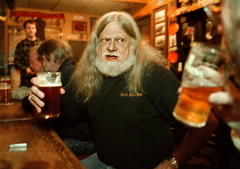 PORTLAND, OR – Don Younger, owner of the world famous Horse Brass Pub, passed away at age 69 earlier this morning.

Younger, who was widely renowned as the 'Godfather' Oregon's craft beer scene, died shortly after midnight due to complications with his heart.

Younger opened his pub in 1976 and is often credited with influencing the rise of Oregon craft breweries such as Rogue, Widmer and Full Sail.

"He was larger than life out here" said Rob Widmer, Co-Founder of Widmer Brothers Brewing Company.

Rob and brother Kurt started their brewery in 1984, after beginning as homebrewers. They are now currently producing over 600,000 barrels and attribute some of their early success to Younger.

"He gave us a chance in the mid-80s and helped us out when nobody else would" Widmer said.

Younger was one of the first to buy beer from the Widmer brothers and was so enthusiastic about craft beer that he would talk to other bar owners about their brand.

Rob Widmer says he will always remember Younger for his "salty" side.

Memorial arrangements for Younger have yet to be announced.