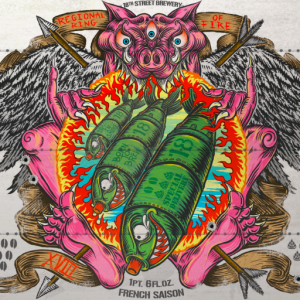 Indiana — One year after opening its doors, 18th Street Brewery will host a three-day celebration featuring an eclectic mix of bands, house-made fresh food and award-winning beers from around the globe.

In just 12 months, the Gary-based brewer has made a major expansion and earned awards and acclaim that include “Indiana’s Best New Brewer” honors from RateBeer. The festivities at 5725 Miller Ave. are free to attend and open to the public from noon to midnight Fridayand Saturday and noon to 10 p.m. Sunday.

“We wanted to do something special to say ‘thank you’ to the community,” said owner Drew Fox. “The support we have received has been overwhelming and this is a way to celebrate our success with the people who have made it all possible.”

All ages are welcome to attend in the brewery’s front-room space, while those 21 and over are welcome in the taproom. Due to anticipated crowds, all food and beer sales will be cash-only.

18th Street will offer its own unique and rare beer offerings throughout the weekend, while friends at well-known breweries are also planning to provide special select beers, in support of the 1-year anniversary. In addition, Chef Virgie will be manning the kitchen, with fresh-made food – including vegetarian meals – on the menu.

The weekend’s musical performances will range from rock to pop and blues to hip hop.

Music begins at 8 p.m. Friday, when the Corey Dennison Blues Band, featuring Gerry Hundt, take the stage. Dennison delivers dynamic blues and compelling soul, while Hundt is a multi-instrumentalist known for his work with the guitar, harmonica and mandolin.

From 2 p.m. to 4:30 p.m. Saturday, Northwest Indiana’s own Nomad Planets will rock the stage. Their rock music has been heard on WXRT, the Taste of Chicago festival and countless clubs in Chicago and Indiana.

Saturday night, Sweet Cobra hits the stage at 7 p.m. The Chicago-based band is known as a post-hardcore band that is known for both ripping guitars and rhythmic rock.

From 2:30 p.m. until 4:30 p.m. Sunday, groove-heavy pop and dance tunes will come from The Diggity. Expect original and eclectic music that covers a 1980s-style techno-pop and experimental funk from the Northwest Indiana ensemble.

Sunday night, Free Ajents bring their hip-hop sounds, while CoJack & Co. will deliver thought-provoking raps, all from 7 p.m. to 9 p.m. Free Ajents feature a live drummer, bass and guitar players and two emcees, whose sounds are joined with hip-hop, rock and electronic samples that bring a raw and hypnotizing sound. CoJack & Co. relies on free-style performances that are simple yet inquisitive, tying together topics ranging from work to family and partying.

That diverse blend of music is representative of the diverse base of support 18th Street Brewery has seen since opening its doors. Starting with self-distribution only in the immediate area, their beer is now distributed in the Indianapolis area and is also available in Denmark, where Fox has collaborated with renowned Mikkeller Brewery.

18th Street Brewery has also increased its production capacity – creating even more jobs in Gary – and is now capable of churning out 1,000 barrels a year, up from just 500 barrels. They have also invested in new, larger fermenters and a canning line, which means faster production to meet the incredible demand and possible further expansion.