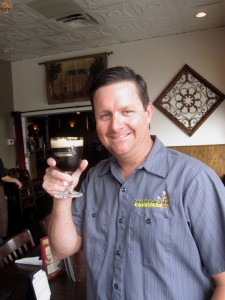 Saison de Colfax features the wondrous gifts one expects to find in a saison: vibrant tropical, candy and pepper-spice aromas and flavors in a refreshing Belgian beer.

But these typical saison gifts arrive with a tan head and a very subtle chocolate/cocoa note, in an almost opaque beer with a deep brownish-black color.

“I really enjoy dark Belgian beers,” says James Pachorek. “So when Wynkoop offered to brew a beer for us while we work on our new brewery, that’s what I wanted to make. We wanted something unexpected to keep people on their toes, that pushes the limits of what a ‘dark’ beer could be.”

To create the beer, the Pachoreks and marketing director Dona Dalton met with Wynkoop head brewer Andy Brown and Marty Jones to brainstorm target flavors for the finished beer.

After collectively deciding on a dark saison style, Brown fermented growlers of a dark wort with six different saison yeast strains. For further research, each of the wort/yeast combinations was fermented at two different temperatures, to gauge the impact of temperature on the yeast’s character.

The group decided on a French style of saison yeast. To get a richly colored beer that didn’t taste “dark,” Brown used a roasted wheat malt to provide the beer’s dark hue. The beer was also made with two-row malt, flaked oats and specialty malts.

To accentuate the beer’s yeast character and further brighten up Saison de Colfax, Wynkoop used Saphir and Sorachi Ace hops in the beer.

“The goal,” Brown says, “was to create a saison that, if you drank it with your eyes closed, you wouldn’t think it was a dark beer.”

“I think people will find it surprisingly refreshing,” Pachorek says, “and they’ll find that it’s okay to have something dark when it’s above 70 degrees!”

Equally appealing for Pachorek is that the project enabled him to get a fresh, local beer made with his input while he and his staff build their Lost Highway Brewing Company. (The brewery is scheduled to open in August.)

The project has other merits for Pachorek. “It connects two localColoradobeer outfits and shows what we can do together,” he says. “Plus it was really fun to get our hands in the process and create something fun and original with our friends.”

“Colfax Avenue,” Marty Jones says, “is home to the state capitol, great neighborhoods andColoradolandmarks, and the seedier, scruffier parts of theDenvermetro area. The beer’s name is a nod to the dark side of Colfax and the edge and allure that comes with it, and the ever-improving and surprisingly welcoming parts of Colfax, too.”