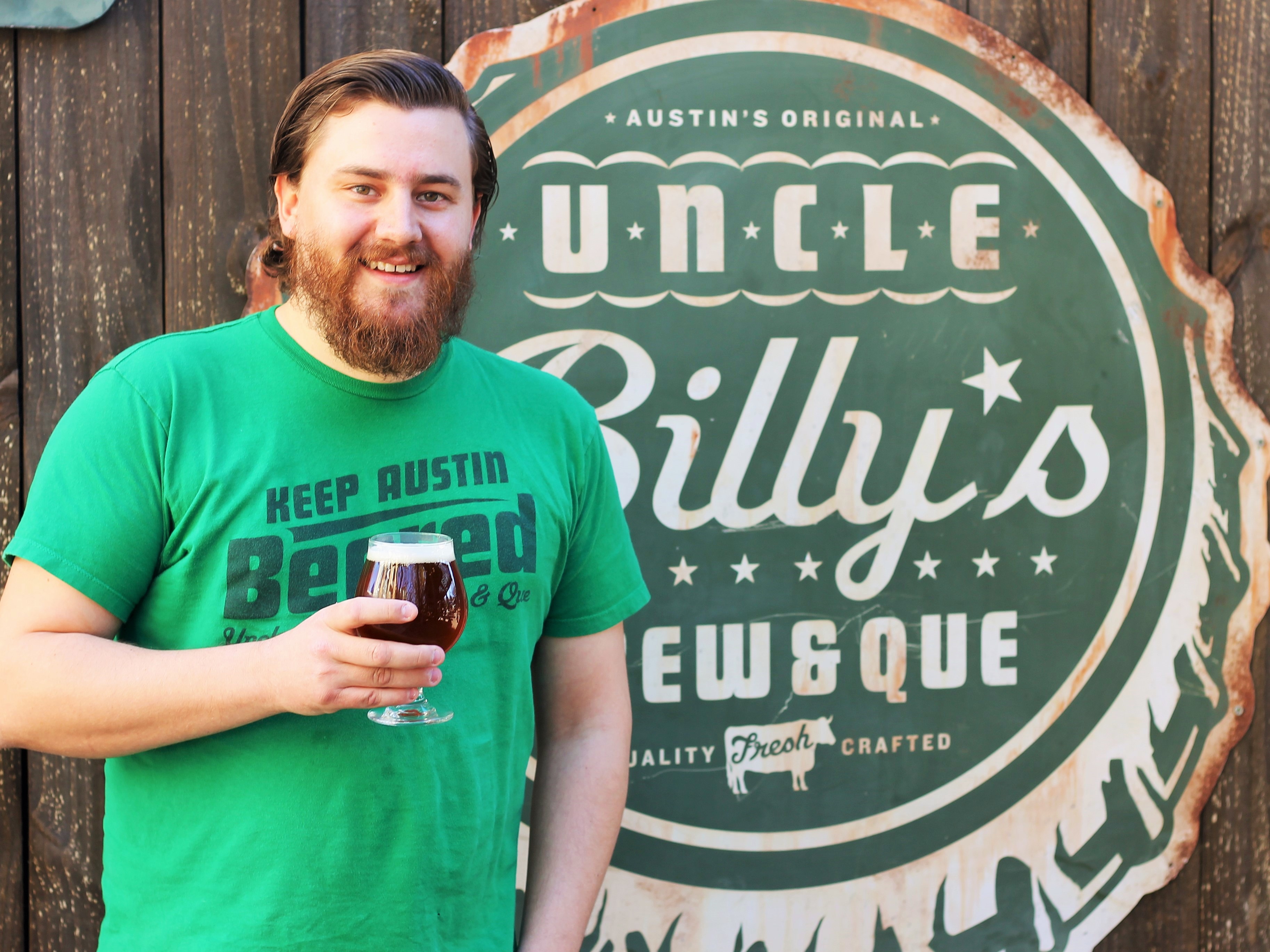 AUSTIN, Texas — Uncle Billy’s Brewery and Smokehouse, one of the oldest and best-known brewpubs in Austin, is bidding a sweet farewell to its current head brewer of three years, Trevor Nearburg, and ushering in a new talent. Stephen Wagner is transitioning from his role as Uncle Billy’s general manager to step in as the brewpub’s head brewer.

In addition to his responsibilities as head brewer, Wagner will also serve as director of craft spirits and cocktails overseeing Uncle Billy’s production of its own line of craft spirits. The brewery will produce its new craft spirits on-site, beginning as early as December 2017. This new beverage program will expand its current menu of craft cocktail options transforming Uncle Billy’s into one of the first “brewstilleries” in Austin.

Wagner is the perfect candidate to take the reigns as Uncle Billy’s head brewer and director of craft spirits and cocktails. While managing the business for the past year he has gained a deep understanding of the operations and customers’ preference for various beer styles and cocktail trends. He has studiously served as Nearburg’s protégé in the brewery for the past six months, learning to brew Uncle Billy’s year-round, seasonal and special beers.

Wagner has been a serious home brewer since 2005. His interest in brewing was sparked by working at the craft beer bar, Cricket’s Grill & Draft house, in Waco, Texas. Over the years, he has competed in two home brew competitions and toured dozens of breweries across the U.S. to further pursue his interest in brewing. Wagner has further honed his beer expertise working in various management jobs at beer-centric locations such as Copper Creek Brewing Company (Athens, Georgia), Stubbies & Steins (Gainesville, FL), and Flying Saucer (Houston; Sugar Land,TX). He became a Certified Cicerone in 2013.

“I was introduced to the Uncle Billy’s brand while working with Flying Saucer in Sugar Land when Christine Celis sold me Barton Springs Pale Ale,” said Uncle Billy’s new head brewer, Stephen Wagner. “That first encounter set me on a completely new path that led to are location to Austin to take the reins at Uncle Billy’s. I’m excited to take on this new challenge, and to dig deeper into my passion for beer. I feel fortunate to have the chance to brew on a large scale, to create new recipes, and become a part of an amazing beer community in Austin and in Texas.”

Wagner will continue to brew many of Nearburg’s recipes at Uncle Billy’s, some of whichWagner will carry forward and tweak. The three year-round core brands: Barton Springs PaleAle, Green Room IPA, and Lazy Day Lager will continue to be the mainstay beers, and Uncle Billy’s “Clusterf#*k”, an already popular session IPA, now joins the line-up of year-round brews.Wagner plans to brew current seasonal beers such as Uncle Billy’s Berdoll Brown Ale (Fall), Shokolad Stout (Winter), Crazy Day Lager (Spring), Schizopetal Hibiscus Lager (Summer) with the same recipes, though he plans to add his personal touches in the future. Wagner is excited to brew classic beer styles and explore his brewing creativity with special beers that occupy several taps in the brewpub.

“As a student of craft beer, I’ve developed a serious appreciation for classic beer styles,” said Wagner. “In addition to brewing our current recipes, and playing with experimental brews, I plan on bringing back tried and true beer styles to our menu. My extensive bar management experience will also influence the way we create our menu to ensure that everyone who walks in the door will be excited about the beer selection. It’s great to have the freedom brew both experimental and true classics.”

Trevor Nearburg departs Uncle Billy’s Brewery to open his own brewery, Beerburg, in the near future.

“I am extremely proud that during my time as head brewer we grew Uncle Billy’s in to one of the largest brewpubs in the country,” said Nearburg. “It is incredible that we achieved all of that, and further expanded to become a production brewpub. The relationships I formed and experiences I gained over the last few years will be invaluable when running my own brewery. This move feels like the natural next step and has been well planned and coordinated with the Uncle Billy’s team. I’m leaving Uncle Billy’s in great hands. Stephen’s passion for beer and abilities as a brewer are incredible. I can’t wait to drink his beers and see how Uncle Billy’s will continue to grow.”

About Uncle Billy’s Brewery and Smokehouse

Founded in 2006, Uncle Billy’s Brewery and Smokehouse is located in the heart of Austin’s funkiest restaurant row on Barton Spring’s Road and is inspired by William “Uncle Billy” Barton, whose 1830’s tract included the renowned springs. Uncle Billy’s offers the perfect combination of award-winning, craft beers and delicious, slow-smoked Texas barbeque. Learn more at: http://www.unclebillys.com/ and connect with Uncle Billy’s Brewery on Facebook, Instagram and Twitter.