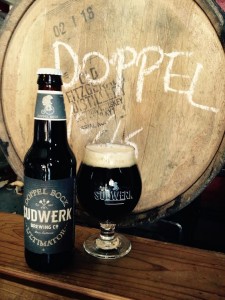 But don’t be afraid of the dark. The Ultimator is subtly powerful. A 10-week, cold storage process gives this lager a velvety smooth finish, helping it earn a medal at the 2014 California State Fair. Roasted malts create the reddish-black color, adding festive flavors like fig and raisin. With 8% ABV and a moderate 45 IBU, it warms us up just in time for the holiday season.

Sudwerk Lead Brewer Mike Hutson warns that it can be sneaky. “The true test of a bock is that the drinker shouldn’t know the beer’s strength until he stands up. This one passes the test.”

Sudwerk invites fans to celebrate the release of the Doppel Bock Ultimator at its Halloween party, from 4 to 8 p.m. on Friday, Oct. 31, at The Dock Store. The event includes a costume contest with prizes. On Wednesday, Oct. 29, Davis Soroptimists will also sell the Ultimator at the final Davis Farmers Market Picnic in the Park, from 4:30 to 8 p.m. at Fourth and C streets, downtown Davis.

Starting the first week in November, six packs of the Doppel Bock Ultimator will be available at Whole Foods, Nugget Markets, Davis Food Co-op and other select merchants around California. Fans will also find it on tap — in limited release — at select accounts throughout the state.

In December, watch for a special release of the Doppel Bock that’s being aged in bourbon barrels. It will be sold in 22-ounce bottles and on draft.