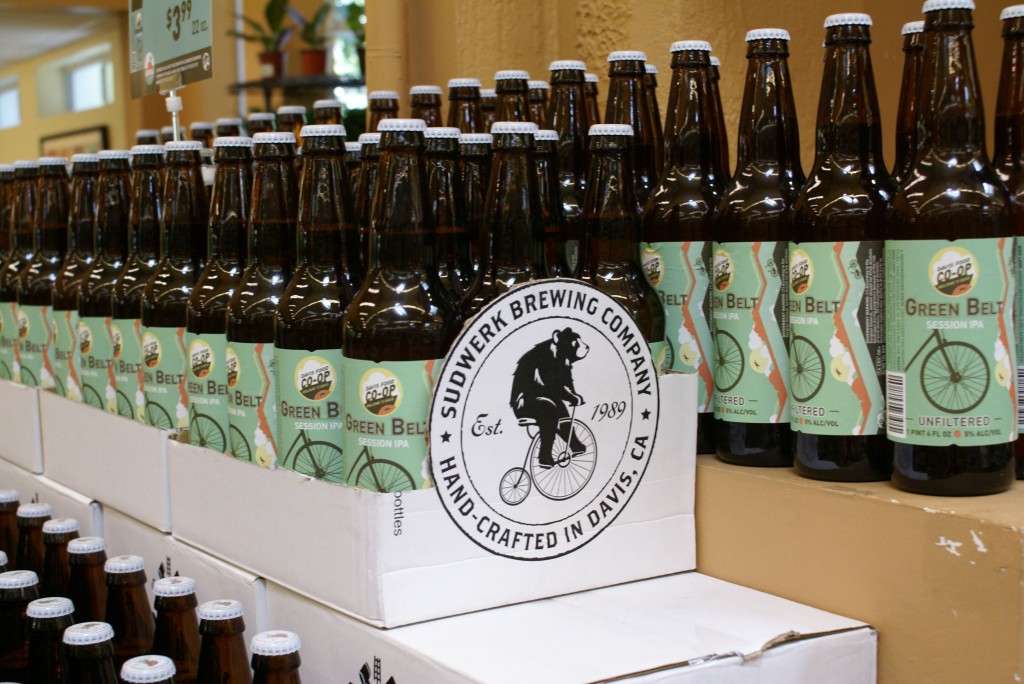 “Green Belt Session IPA was specially crafted to be a light-drinking ale, perfect for beating the late summer heat,” said Lis Harvey, the Co-op’s brand and advertising coordinator. The 22-ounce bottles hit Co-op shelves on Wednesday, the first day of classes for Davis public schools. For parents, it may be “a refreshing antidote to back-to-school blues,” or reason to celebrate.

Not only was it brewed locally, the beer features local ingredients, like hops from Kuchinski Hop Ranch in Lake County, Sudwerk Brewery co-owner Trent Yackzan said. “It has a fruity, refreshing aroma and flavor, and is super smooth. It lives up to its name as a session IPA.” Session beers allow drinkers to enjoy more than one — within a reasonable time period or “session” — without overwhelming the senses or reaching inappropriate levels of intoxication.

“Our take on a session IPA is not just that it’s lower alcohol, it’s also ‘sessionable’ and drinkable. Hops are not going to overpower any of the other ingredients.” That’s no easy task with an India Pale Ale, which typically has higher alcohol to balance the bitter hop flavor.

It is the Co-op’s most local and co(h)operative beer to date. Two previous releases, Better Off Red and Amberversary, were brewed in Sacramento. A handful of clerks vetted this year’s recipe in February, and Co-op staff members assisted Sudwerk brewers to make and bottle it in August. Just a mile separates the two community partners: Sudwerk is at 2001 Second St., and the Co-op is at 620 G St., Davis.

For more information, e-mail Julie Cross at jcross@davisfood.coop or call the Co-op at 530-758-2667. For a short video on the delivery, go to https://vine.co/v/MljBnDHJmT3.