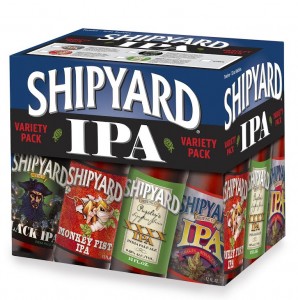 “The Shipyard Variety IPA 12-pack is the most diverse variety pack of IPA in the market today,” said VP of sales and Marketing, Bruce Forsley.

More about the beers:

Shipyard Black IPA is a dark black beer that combines a rich malty character with the crisp flavor and aroma of American Northwest hops. 6.2% ABV

About Shipyard Brewing Company: Founded in 1994, Shipyard Brewing Company is located on the historic waterfront in Portland, Maine and produces 17 varieties of award-winning English style and seasonal beers. Its products are distributed in over 40 states. The Brewers Association ranks Shipyard as the 15th largest craft brewery in the U.S. and 23rd overall. In 2013, the brewery produced 166,060 barrels (2,288,300 cases) of its award-winning brews.