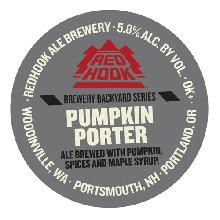 PORTSMOUTH, N.H. — It’s true, summer is nearly over, which means that fall is about to begin. To ensure there’s good beer for every important fall occasion: watching football with buddies; gorging yourself on turkey and pumpkin pie; or celebrating the greatest holiday ever — when everyday women compete to be the sexiest nurses, cats, pirates or police officers — Redhook is releasing Pumpkin Porter.

Redhook’s Pumpkin Porter pays tribute to the season and he’s stoked to release it as the fifth beer in his Brewery Backyard Series.

The dark chestnut brown beer is made with pureed pumpkin, along with light chocolate, Munich, and caramel malts, roasted wheat, oats, and locally malted barley. Cinnamon, nutmeg and ginger are also added during the brewing process, and maple syrup is added to the brew during fermentation.

“We had a lot of fun with this brew,” said Alex Kopf, Redhook senior brewer. “We wanted to make a great porter and added traditional fall flavors — pumpkin, chocolate, maple syrup, cinnamon and nutmeg — to put a little Redhook twist on the style. Lightly hopped with Northern Brewer hops, Pumpkin Porter is a full-bodied, rich and roasty porter perfect for all things fall — eating turkey, watching football or drinking with your buddies around a bonfire.”

Pumpkin Porter is available for a limited time on draught only in the brewery’s Cataqua Pub in Portsmouth, N.H. and in a handful of bars and beer-centric restaurants in New Hampshire, Maine, Vermont, Connecticut, New York and Massachusetts. The beer is 5.8% ABV and 20 IBU.

Redhook’s brewers are a creative bunch and are always cooking up new ideas for beers outside the standard lineup. While not all make it into production, several times a year the brewers’ favorite beers are brewed and released under Redhook’s Brewery Backyard Series. These limited release brews are only available on draught in our Cataqua Pub and in a handful of bars and beer-centric restaurants in New Hampshire, Maine, Vermont, New York, Connecticut and Massachusetts.