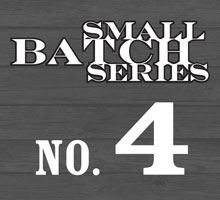 SAN ANTONIO, TX — As a combined brewery/distillery, Ranger Creek Brewing & Distilling can make products that no one else can. They have just released their most exciting beer to date — the first one to be aged in their own bourbon barrels – and they intend to brag about it pretty loudly. The beer is the 4th release in the brewery’s Small Batch series — a line of seasonal, single batch brews designed to be unique, interesting, and often experimental.

Rob Landerman, head brewer at Ranger Creek, describes Small Batch Series No. 4 as “carrying a sumptuous nose of sweet oak, mesquite smoke, dark chocolate, toasted marshmallow and vanilla, along with flavors of dark bittersweet cocoa laced with sea salt, smoke, vanilla, and caramel. Its a warming winter release that is heavenly to sip now, but it will also age and mellow nicely for up to 10 years if stored carefully.”

Beer aged in bourbon barrels is nothing new to the craft industry. However, Ranger Creek is the first brewery to use their own bourbon barrels instead of purchasing used barrels from a bourbon distillery. The barrels were first used by the brewstillery to age their Ranger Creek .36 Texas Bourbon, then kept in-house to age their beer. Small Batch Series No. 4 allows Ranger Creek to focus on their goal of showcasing the relationship between beer and whiskey.

Each Small Batch release is made in small quantities, and there are only about 7,000 bottles of Small Batch No. 4 for all 27 million Texans. The brewery recommends that beer drinkers grab a couple of bottles so they can drink one and save the others to add to their collection. Small Batch Series releases are meant to age well over time and will cellar best in a dark place around 50 degrees. Each batch is brewed and bottled by hand and undergoes a secondary fermentation in the bottle. Pour carefully so as not to rouse the yeast. Small Batch Series No. 4 is also available on draft. Only one batch each of kegs and bottles was brewed, so once the beer is gone it is gone for good.

Continuing with the Small Batch theme, the label simply indicates “Small Batch Series No. 4”. The unique color, number, and QR code on each label identifies each batch, the details of which can be referenced on Ranger Creek’s website or by scanning the QR code with a smart phone.

Small Batch Series releases are packaged in 375 ml baby Belgian bottles that are wax dipped to protect them from the elements during cellaring.

Ranger Creek Brewing & Distilling is the only combined brewery/distillery in Texas, proudly located in San Antonio where they handcraft beer and bourbon one batch at a time. They are the only microbrewery in San Antonio, one of a few combined brewery/distilleries in the U.S., and the only combined operation making both beer and bourbon. They focus on interesting recipes and use local ingredients from the state of Texas as much as possible. The company uses much of the same equipment to make both beer and bourbon, which is possible because in order to make bourbon, beer must be made first. They encourage visitors to San Antonio to sign up for one of their regularly scheduled tours and come by for a visit.