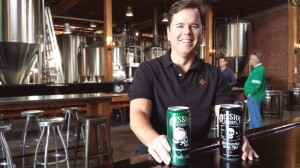 “I guess it’s true: Americans like big cans,” says Martin Saylor, Mission Brewery’s national-sales director. “The quarts have been a hit for us and now our distributors in our other states want to get their hands on them.”

Mission released the pioneering cans in early October in California and Colorado. The cans are now joining Mission’s bottled and draft beers in establishments and stores in Ohio, Indiana, Kentucky, Maryland, Virginia, North Carolina and Florida.

The first quart cans ever used by a US microbrewery, the cans have spurred some hefty growth on Mission’s home turf.

“Our California sales for the past three months,” says Mission Brewery founder Dan Selis, “are up nearly 300% when compared to last year.”

To help meet this increased demand for its beers, Mission has increased its production and staff.

Mission has also increased its brewing production by 40%. The brewery now runs 14 brewing shifts each week, up from a schedule of 10 brews each week.

“We’ve experienced a rapid upheaval of sorts,” says Mission head brewer John Egan, “with the release of the cans and a quick jump in demand for our beer. It’s very exciting for us and we want to stay in front of that surge. So we’ve made significant production moves to make sure our fans, retailers and distributors stay supplied with Mission beer.”

Selis points out that it’s not just Mission’s quart cans that are powering the microbrewery’s growth.

“Our heavy artillery,” Selis says, “has certainly created a big wave of consumer interest and sales for us. But in the past three months we’ve landed several hundred more placements thanks to Martin Saylor and our distributors. Our stores are taking in the cannons and bombers and sixpacks of the rest of our beers.”

Mission Brewery is located in an 1894 structure in downtown San Diego, on the edge of the city’s popular Gas Lamp District. In the mid 1900s, the building (now on the National Historic Register) served as a Wonder Bread bakery.

The building is also home to Mission’s popular tasting room, which features a pair of lengthy bars, one of which allows customers to drink within reach of the brewers and their brewing equipment. The brewery’s name is a nod to one of San Diego’s first breweries, founded in 1913 and shuttered when Prohibition began.