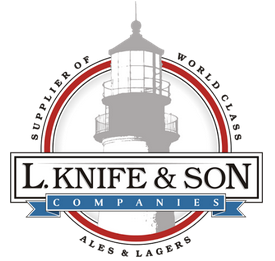 EVERETT, Mass. — L. Knife and Son Companies, the Sheehan Family Company, is honored to be named a finalist for the Tenth Annual Team Massachusetts Economic Impact Awards, awarded by MassEcon.

Finalists are selected based on various criteria including job growth, facility expansion, and investment since the start of 2012. Additionally, MassEcon takes community involvement into consideration when selecting a finalist.

Since January 1, 2012, the company has seen nearly a 25% job growth rate. This growth led to a $13.4 million building acquisition that relocated Craft Brewers Guild of Boston to its new home in Everett, Massachusetts. The 200,000-square-foot warehouse on Beacham Street allows for more efficient access to greater Boston and the major highways. The Everett warehouse has also become the hub for all of L. Knife and Son’s New England distributors. This hub and spoke model allows for bulk shipping from brewer partners, which provides cost savings throughout the supply chain and enables L. Knife to supply the Boston marketplace with the freshest possible beer.

As a privately held company in its fourth generation of family ownership, L. Knife has had a long history of community involvement. The Sheehan Family Foundation, endowed by L. Knife & Son, is a non-profit whose mission is to protect the environment and enhance the quality of education, with a focus on projects in eastern Massachusetts. Over a fifteen year period the foundation has provided over ten million dollars in funding for 27 different environmental conservation organizations and twenty three children’s education programs. Most recently they served as the leading sponsor for Camp Harbor View, an organization founded by Jack Connors and backed by Mayor Thomas M. Menino. In addition to serving as presenting sponsor for the 5th Annual Camp Harbor View Harborthon 5K, over thirty employees participated in the race.

MassEcon, founded in 1993, is a non-profit, non-partisan entity that serves as the state’s private sector partner in promoting Massachusetts as the premier choice for business growth. Its services include the state’s only Site Selection Service, which helps expanding and relocating companies find a home in the Commonwealth; the Research & Information Service, which provides companies with the information they need to evaluate the Commonwealth as a location to grow; and the Massachusetts Ambassadors, a network of civic and corporate leaders who help market Massachusetts as a place to do business.

The L. Knife & Son Companies, Inc. is the nation’s largest craft beer wholesaler, distributing a portfolio of the finest American Craft, Specialty and Imported beers that the world has to offer. Through four generations of family ownership and one hundred and fifteen years in business, the L. Knife and Son Company has grown to be one of the top fifty privately owned businesses in Massachusetts as well as one of the ten largest wholesalers in the country. This has been made possible through the company’s mission of partnering with world class people, who produce world class brands, with world class potential.