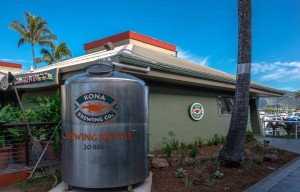 Kailua-Kona, Big Island of Hawaii – Over the past decade, millions of visitors to the Kona Brewing Hawaii Kai Marina Pub entrance have been greeted by Kona’s iconic brewing kettle. This past February, Kona transformed its brewing kettle into a rain harvester, making the iconic landmark something far more valuable.

The Kona rain harvester collects and repurposes storm water for irrigation of local plants and the marina’s embankment. The transformation is testament to Kona Brewing’s commitment to conservation and preserving Hawaii’s water resources during a significant time of drought. In addition to the rain harvester, Kona Brewing supports a number of clean water campaigns, including Oahu Surfrider Foundation and Malama Maunalua, among others.

The Koko Pub brew kettle is an original piece of machinery moved from the Big Island facility in 2003. The brew kettle had been in the same place since the restaurant opened in 2003 and is one of the most photographed images at the pub. Said Davis, “The brew kettle is a perfect vessel for rain catchment, and this new system is cool–literally. The sun really beats down us here at the pub, and at our headquarters on the Big Island, we trap condensation in a whisky barrel to water surrounding landscaping. We also offset brewing operations with solar panels, and now our pub in Honolulu captures the rain. I’m proud to be able to bring these innovations to life at our pubs.”

In addition to providing irrigation to farms, harvesting rain and storm water runoff prevents flooding of low-lying areas, erosion, and contamination of surface water with pesticides, sediment and fertilizers. It provides water when there is a drought and replenishes the ground water level while helping in the availability of clean water by reducing the salinity and the presence of iron salts. Water runoff that filters through soil is often cleaner than water that falls onto concrete.

Honolulu receives 17 inches of rain per year, and the Kona kettle system will now collect it from the roof of the brewpub rather than letting it soak into the surrounding concrete, marina, or ground. When rainwater is rerouted into the brewkettle, it is then dispersed to the landscaping around the pub and down the bank into the marina water.