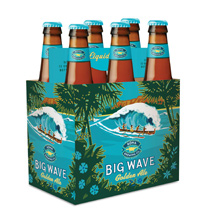 KAILUA-KONA, HI. – Fresh off victories at the Great American Beer Festival in Denver, CO, Kona continues its winning streak by nabbing two medals at the Great International Beer & Cider Competition in Providence, RI this past weekend. Big Wave Golden Ale and Pipeline Porter were awarded first and third place finishes, respectively, in the Golden Ale and Robust Porter categories. Both are available in 31 US states, with Big Wave hitting the mainland market this past summer and Aloha Series star Pipeline Porter now in its seventh season on the mainland.

The Great International Beer & Cider Competition awarded first, second and third place winners in 44 categories of ales, lagers and ciders. A blind tasting format, judges knew only the style and subcategory of 470 entries of beer and cider. More than 5,500 beer lovers were able to sample over 250 beers and ciders at the Rhode Island Convention Center at this year’s competition, which has been held since 1997.

“Big Wave is on a tear and I’m stoked to share the island flavors with beer lovers nearly 5,000 miles from our home in Kailua-Kona, Hawaii,” said Kona Brewing president Mattson Davis. “Our brewing team has dialed in some dynamite recipes and it’s great to know that others are enjoying the Liquid Aloha as much as we are.”

Kona Brewing Company was started in the spring of 1994 by father and son team Cameron Healy and Spoon Khalsa, who had a dream to create fresh, local island brews made with spirit, passion and quality. It is a Hawaii-born and Hawaii-based craft brewery that prides itself on brewing the freshest beer of exceptional quality, closest to market. This helps to minimize its carbon footprint by reducing shipping of raw materials, finished beer and wasteful packaging materials. The brewery is headquartered where it began, in Kailua-Kona on Hawaii’s Big Island. It has grown into Hawaii’s largest brewery, has three restaurant sites in Hawaii and beer distribution reaching 31 states and Japan. It is the 13th largest craft brewery in the country. For more information call 808-334-BREW or www.KonaBrewingCo.com.