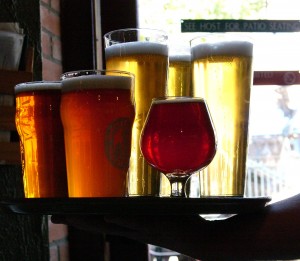 For the craft beer industry to further germinate and wrest greater market share from domestic beer, brewers will have to identify channels that are either untapped or not yet fully realized. Bill Pecoriello, CEO of GuestMetrics, argued at the Craft Brewers Conference last week in Washington D.C. that the on-premise arena — and especially casual dining — is particularly raw and could significantly drive craft beer’s growth.

“The casual dining segment is underperforming the craft growth that we’re seeing in other parts of on-premise,” Pecoriello said.

Pecoriello said that while food sales dominate during breakfast (5 a.m. to 11 a.m.) and lunch (11 a.m. to 3 p.m.), beer sales spike in the later hours of the day. During happy hour, from 3 p.m. to 6 p.m., beer accounts for 11 percent of an on-premise check, while food drops from 98 percent at breakfast and 85 percent at lunch, to just 67 percent for happy hour and dinner. Happy hour also accounts for 33 percent of the alcohol sold during this time, which is the best performing period for beer.

GuestMetrics also analyzes trends in beer styles, which is notable considering the fluctuating nature of the craft beer industry. Pecoriello stated that lagers account for 67 percent of beer units sold in on-premise accounts, followed by ales at 20.4 percent and cider/flavored malt beverages (FMB), premium alcoholic beverages (PAB) and seasonals at 12.6 percent. Despite the dominance of lagers, the style contracted in units sold by 5.2 percent, while units of ale — a style that is closely identified with craft beer in many analyses — grew 4.2 percent; units of cider, FMB, PAB and seasonal grew 2.9 percent.

More statistics from Pecoriello’s seminar will follow in future posts.