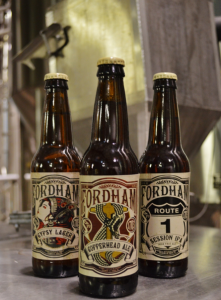 Dover, DE — Fordham Brewing is resetting their core lineup beginning in February of 2014.

Three new core beers, the Rinse and Repeat series, focus on sessionability. None of the beers will clock in at higher than 5.0% ABV. The first, Gypsy Lager, is a Munich-style Helles brewed in the tradition of great German lagers. Munich and Vienna malts provide a honeyed backbone that is contrasted with the clean bitterness of Perle Hops. The result is a crisp and refreshing beer. Copperhead, an American Amber Ale, will remain Fordham’s flagship beer. Caramelized malts give this beer its flavor and signature copper hue. Bravo hops attribute a slight bitterness to the finish. Finally, and most excitingly, Route 1 Session IPA will join the year-round lineup. Noted for its hop forward flavor, low alcohol content, and pale amber color it possesses a subtle malt presence. The smoothness of this ale makes it easy to lather, rinse, and repeat as needed.

Jim Lutz, President and CEO of Fordham Brewing, said, “We designed these beers to tell our story and the craft beer drinker’s journey. Gypsy Lager is approachable and represents the start of an adventure. In our story, it was our first batch of beer in the Annapolis Rams Head in 1995. For the craft beer drinker, it is the first step away from mass produced beers. Copperhead Ale is a little bit more complex and intense. For us, that relates to the years that we spent crafting beers before it was mainstream. For the craft beer drinker, it is that first taste of a beer that embraces full flavor. Finally, Route 1 is about where we and the drinker are headed. Sessionable, but with all the flavor of a traditional IPA, it is about taking on new challenges.”

Look for the new Fordham beers on retailer’s shelves during the first quarter of 2014. Gypsy Lager, Copperhead Ale, and Route 1 IPA will be available in six-packs and on draft in the Mid-Atlantic region.

Based on shared values and a common philosophy of quality brewing, Fordham Brewing & Dominion Brewing joined forces in 2007 and consolidated operations in 2009. The First State is now home to the Fordham & Dominion Brewing Co., where beer lovers from near and far are able to stop by, get to know us, and enjoy our handcrafted beer and soda. Our roots run deep throughout the Mid-Atlantic region and we remain dedicated to our craft. Throughout our history, we have always believed in two things: the beer we make and the people who drink it.