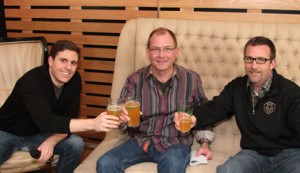 Brew Talks — a free, traveling educational meetup series that aims to provide craft brewers with access to valuable insight into the branding, marketing and distribution of craft beer — will make stops at four West Coast breweries during the week-long tour, which kicks off on July 23 at the Lost Abbey in San Marcos, Calif.

Brew Talks will also be held at Golden Road Brewing in Los Angeles, Calif. on July 24 and Widmer Brothers Brewing in Portland, Ore. on July 27. A fourth stop is also scheduled for July 25 in Seattle, Wash. The official venue announcement will be made next week.

At each location, Brewbound.com editor Chris Furnari will moderate discussions on the business of craft beer with well-known brewers and distributors. Official speaker announcements will be made in the coming weeks.

Launched in January, Brew Talks are gatherings designed to provide craft brewers, distributors and retailers the opportunity to come together and have in-depth discussions on the business side of craft beer. The free events serve as an educational and networking opportunity for beer industry professionals and all events are broadcast globally via a free live stream.