Kansas City, MO
Brew Talks Kansas City 2015
You are viewing a past event. Check out our upcoming events in 2019. 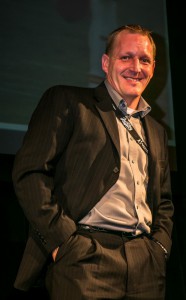 Brewbound is excited to swing by Boulevard Brewing in Kansas City this upcoming Monday, May 18, to host the next installment of Brew Talks, our traveling meetup series for industry professionals.

Today, Brewbound is pleased to announce that Jon Poteet, vice president of marketing at Central States Beverage Co., will offer his unique perspective on things from the middle tier.

Specifically, Poteet will explain how his company, a MillerCoors-aligned distributorship, was able to sell 1 million cases of Boulevard beers throughout the greater Kansas City metropolitan area alone in 2014, the most ever by one of the brewery’s distributors in a single year. To better understand just how much beer that is, that area, which stretches across the borders of Kansas and Missouri, is only about a 10 million case-per-year market.

Poteet will walk through how – since acquiring the brand in 2007 and launching with sales of 497,000 cases – his company was able to grow it so dramatically in such a short span of time. Further, he’ll provide a glimpse into the future, expounding on how he plans to build on the brand’s momentum.

Though Boulevard accounted for roughly a quarter of all Central States case sales in 2014, it isn’t the only brand the company sells. Poteet will also provide insight on how his portfolio is acting in the marketplace, while spotlighting broader craft beer trends he has seen along the way.

Attendees will also have the opportunity to hear from Simon Thorpe, the president of Duvel Moortgat USA, and three of Kansas City’s newest craft brewery startups.

Beer industry professionals are invited to join us in Boulevard’s Muehlebach Suite (2501 Southwest Blvd, Kansas City, MO 64108) at 5:00 p.m. The first panel discussion is scheduled to start promptly at 5:30 p.m.

Since hosting our first event in the basement of a craft beer bar in Boston in 2013, the meetup series has developed into a multi-city tour where beer industry professionals can come together inside of some of the country’s most recognizable craft breweries and share business insights with one another. In less than two years, we’ve hosted 19 meetups, in 15 U.S. cities, and connected with thousands of individuals from all tiers of the industry. The events are also broadcast globally via a free live stream.