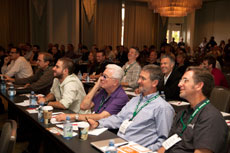 We’re less than 24 hours away from a SOLD OUT winter edition of the Brewbound Session, being held on Dec. 4 at the Paradise Point Resort & Spa in San Diego, and we’ve still got some final program notes to announce.

Grab a beer – this one is jam-packed with updates.

Bombardier will supply Brewbound Session attendees with the most current data and information surrounding the California drought, as well as insight into the region’s water supply and current usage rates. Following his presentation, Bombardier will join McCormick and Brewbound editor Chris Furnari for a discussion on how the drought has already impacted California breweries and what small brewers should do to prepare for long-term water supply issues.

Brewbound’s commitment to providing attendees with informative and engaging conversations on the business of craft beer will be highlighted by a trio of breakout discussions during Thursday’s conference. In an effort to address the needs of breweries at various stages of development, we’re offering sessions for both new and established craft brands.

For newer and developing brands, Brewbound has two talks on tap: At 2:45 pm, David Hayslette, the director of marketing and business development for MeadWestVaco, will discuss packaging considerations for craft brewers and explain how differentiation can drive repeat purchases.

Also taking place on the main stage (2:45 pm) during the breakout period will be a unique troubleshooting discussion for maturing and established brands. In this panel, the focus will be on attendee issues and audience members will have an opportunity to participate in the conversation by asking direct questions to a trio of experts. Moderated by Chris Furnari, the panel – which features Port Brewing/Lost Abbey co-founder, Tomme Arthur; Hangar 24 Craft Brewery founder Ben Cook and Calicraft Brewing founder Blaine Landberg – will address how different brewery owners approach everyday brewery operations, marketing sales and distribution challenges.

Need further proof that craft beer has crossed into the mainstream? Entertainment giant Live Nation is shifting more of its attentions towards the space and is supporting smaller craft brands. Through its multiple House of Blues venues, the company plans expand its popular “brews and grooves” beer festivals nationwide in 2015, and is also committed to putting more craft brands on tap in its restaurant and concert halls across throughout the country.

While the chance to pour beer at a single House of Blues location would be enough for many small startups, it’s the chance to forge a long-term relationship with Live Nation that should have fast-growing craft brewers excited.

That’s why we’ve invited Thomas Towning, the director of restaurant operations for House of Blues, to discuss how the chain is working with craft brewers across the country via its beer fests as well as at its various restaurant and retail locations.

If you can’t be in San Diego to join us in person, tune into a live video stream of the conference, which will begin at 9:00 PST.

Eugene M. Pak is a partner at the law firm Wendel, Rosen, Black & Dean LLP (Oakland, CA) where he heads the firm’s craft brewery law practice. Eugene has been practicing law for over twenty years, and represents craft breweries in a wide variety of areas including trademarks, contracts, financing and formation, advertising, real estate, regulatory, employment and litigation matters. Prior to joining Wendel, Eugene worked at large international and national law firms. Eugene is a graduate of UC-Berkeley School of Law and the University of Michigan. His Twitter account is @BeerAttorney. Eugene’s firm is an allied trade member of the Brewers Association and the California Craft Brewers Association.

Thomas Towning started working in food and beverage at Disneyland at the age of 16. In a few short years he was thrown into the world of F&B management through the Disney’s management training program.  Since, he has worked for Lucille’s Smoke House and Bbq, Patina Restaurant Group and currently is the Director of Restaurant Operations at House of Blues in Anaheim and the company’s go-to resource for craft beer.