Chicago, IL
Brewbound Session Chicago 2015
This is a past event. Replay all presentations and view upcoming events. 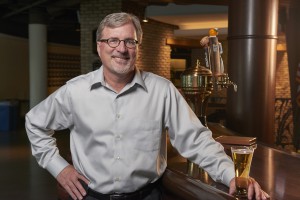 Bookending Brewbound Session Chicago last week, the high end portfolio chiefs from both Anheuser-Busch InBev and MillerCoors were on hand to discuss their view of the craft space and their respective approaches to acquisition.

Kicking off the day was Scott Whitley, the newly appointed CEO of Tenth & Blake, MillerCoors’ craft division, who shared his thought on craft’s ever-growing “long tail.” Later on, Andy Goeler, CEO of Craft at A-B InBev, opened up a little bit about his own company’s activity in the space, which has ramped up in recent months with the purchases of craft outfits like Elysian, 10 Barrel Brewing and Blue Point.

Selected highlights – slightly edited for brevity – as well as video from both talks are included below.

Whitley discusses the future of national, regional and local breweries:

“You’ve got, probably, maybe 10 to 20 players who are already national or they’re going for it. Some are already there, like a Sierra or Boston. Some are working their tails off to get there, like a Lagunitas. Those guys are probably going to be be okay because they’ll have the mass, margin, and momentum to fight the wars going forward for the next generation.

Then you’ve got the local guys, the hundreds, maybe thousands now brewpubs, who are happy to stay local.

It’s the folks that are kind of getting a little beyond their ski tips, they’re out of their local market, they’re into a couple states, three states, four states, they’re regional. I worry for those guys most because they might get caught out sort of in the middle. You don’t have the mass and the size to go for it but on the other hand you’re larger than a local player. That’s why I think the M&A activity, frankly, has kicked in so heavily because a lot of those guys realize, ‘I’m at a point now.” You know, the hell of the brewing industry is you can’t add capacity one barrel at a time. You’ve got to add them in big chunks and those big chunks are expensive chunks. A lot of guys wake up and realize, ‘I really have no choice if I’m going to be viable down the road. Do I sell out? Do I partner up? Do I merge with somebody?’ And it’s forcing a lot of those strategic decisions for the guys that are sort of beyond local but not quite national.

On where T&B fits into it all:

If we do focus on [M&A], it’s going to be on complementary styles. We’re not, admittedly not, in a big way in the IPA space. It would be complementary, so if an opportunity came along that strategically made sense to fill in a space we don’t currently have much business in, we’d absolutely take a look at it.

Goeler on what A-B looks for in acquisition targets:

One of the first things that’s really most important is having a management team, an ownership team that wants to stay involved in the business. That’s pretty critical to us to keep that culture going. So I think strategically having somebody, again long term, that wants to stay in. The brands, really, are also very critical. We talk about flagship fatigue, we want to make sure the brands are strong, the beer is great, there’s an amazing culture in the company.

The other strategic thing, I think that’s very critical to us, we’re very biased about our wholesalers. We want to make sure that we partner with other brewers, that we have the ability to have those brands distributed through our network.

On a regional strategy:

I think those regional opportunities give us the ability, again, to address local as well as the rest of the whole range of consumer demand out there.

The strategy is – it’s fairly loose. Obviously we have 10 Barrel and Elysian up in the Pac-Northwest, so I don’t think we’ll be buying a third one up there.

There aren’t people saying, “Minnesota’s not good, it’s 400 miles away from here, we need to go down here.” That stuff’s not happening. We’re talking, entertaining, looking for that passion, that love, that strength of the brand.

On the company’s future acquisitions: