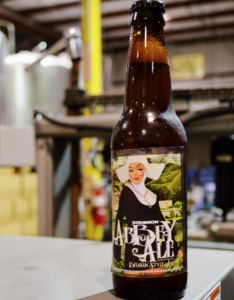 The first person to ever record the preservative powers of hops in brewing was a nun. In fact, during the Middle Ages, convents brewed beer right along with monasteries. While monks bask in all the glory these days, Abbey Belgian style ale hails the under-recognized brewers of our holiest beverage. With the help of Perle and Saaz Hops and Golden Promise, Vienna, Caramunich, and Peated malts, Abbey reaches 7.2% ABV.

Recipe designer, Brewer Justin Colatrella, stated, “Each time we brew one of our pinups, we try to put a unique twist on the way higher gravity beers are perceived. Each of our seasonal pinups has veiled the strength of the beer with strong esters. When creating Abbey, we wanted a strong yeast to offset the strong malt backbone. She makes a divine addition to our dynamic Pinup Series.”

Abbey Belgian Style Ale will replace Dominion’s award winning Candi Belgian Tripel in the Pinup variety 12-Pack and will be available on draft. This nun will be flying off shelves and taps in the Mid-Atlantic region during the Spring.

Based on shared values and a common philosophy of quality brewing, Fordham Brewing & Dominion Brewing joined forces in 2007 and consolidated operations in 2009. The First State is now home to the Fordham & Dominion Brewing Co., where beer lovers from near and far are able to stop by, get to know us, and enjoy our handcrafted beer and soda. Our roots run deep throughout the Mid-Atlantic region and we remain dedicated to our craft. Throughout our history, we have always believed in two things: the beer we make and the people who drink it. For more information, visit fordhamanddominion.com.