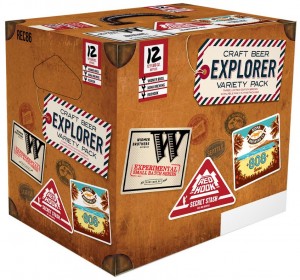 “Today’s beer drinkers love to explore new styles and flavors, and they’re looking for variety,” said Robert Rentsch, Senior Director of Brand Development. “CBA is home to three of the most popular and original craft breweries in the U.S., which gives us a unique advantage in that we can offer a variety of beers from several distinctive breweries, as opposed to just one. We developed the Craft Beer Explorer package to introduce consumers to some long-time pub favorites and innovative, small-batch beers that they might not be able to get outside of our breweries.”

The Craft Beer Explorer Variety Pack features seasonally relevant specialty beers that are typically on tap at the brewery’s pubs but not yet available in broader distribution. For instance, many of the popular and unique craft beers from Kona Brewing in Hawaii never make it to the mainland. In this way, the Explorer Pack creates a unique opportunity for CBA to introduce new beers outside of their home markets. Every Explorer Pack invites consumers to visit http://craftbeerexplorerpack.com, a website where they can learn more about the beers, and share feedback.

Kona Brewing Lemongrass Luau Blonde Ale — Lemongrass Luau is a crisp and refreshing blonde ale brewed with wheat malt, a variety of hops, Maui turbinado sugar and fresh Big Island Ginger and Lemongrass. The hops lend layers of earthy complexity that complement the subtle sweetness from the turbinado, which is further balanced by spicy, gingersnap flavors and aromas from the fresh local ginger added throughout the brew. With its modest alcohol content Lemongrass Luau can be considered a session beer, perfect for pau hana (after work beer), sharing pints with friends, and great with almost any meal. (ABV 5.8, IBU 20)