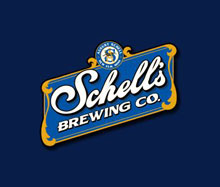 NEW ULM, MN. – The August Schell Brewing Co. (www.schellsbrewery.com), the second-oldest family-owned brewery in the country, brewer of Schell’s and Grain Belt, is set to release its latest Stag Series beer, #7-American Barleywine, to the public next week.

Schell’s Brewery came up with the Stag Series during their year long 150th anniversary celebration, originally called the Anniversary Draft Series, after finding an old recipe book amongst the archives. The book dated back to prohibition, and after flipping through the initial pages, it was discovered the book contained a collection of old German brewing recipes, including several styles which were no longer seen today. A total of eight different beers were brewed over the course of 2010, including styles such as: 1878 Einbecker Doppelbock, Roggenbier, the 1905 V.T. (Vacuum Tonic), Bavarian Forest Dampfbier, and the Hopfenmalz.

The Anniversary Draft Series was a huge hit in the Schell’s market and it was decided at the brewery to continue on with a similar series, this time called the Stag Series. The Stag brew is a limited release brew that goes out two to three times per year. The latest release, Stag #7, is an American Barleywine. Each 100 bbl brew of Stag #7 (about 200 bbls total) required two separate mashes of over 6,000 pounds of malt. 150 pounds of hops were added to the wort during the extended (90 minute) boil. The wort was then cooled and fermented with an American Ale yeast. Finally, the beer was aged for over three months. The end result is an intensely malty and assertively hopped American Barleywine. With this beer, expect an amped up malt flavor, high alcohol (9.5% ABV) and heaping amounts of citrusy American hops.

August Schell Brewing Company, located in New Ulm, MN, sits atop the same site it was built on in 1860. With its sprawling grounds, beautiful gardens, Schell Mansion, and deer park, the brewery is a tourist destination for any beer lover. Schell’s boasts a proud heritage of 153 years of continuous family ownership and specializes in craft beers. In addition to the line of specialty beers, Schell’s also produces Grain Belt Premium, Grain Belt Premium Light and Grain Belt Nordeast. For more information on Schell’s Brewery, tour schedules or any of their 17 quality beers, go to www.schellsbrewery.com.