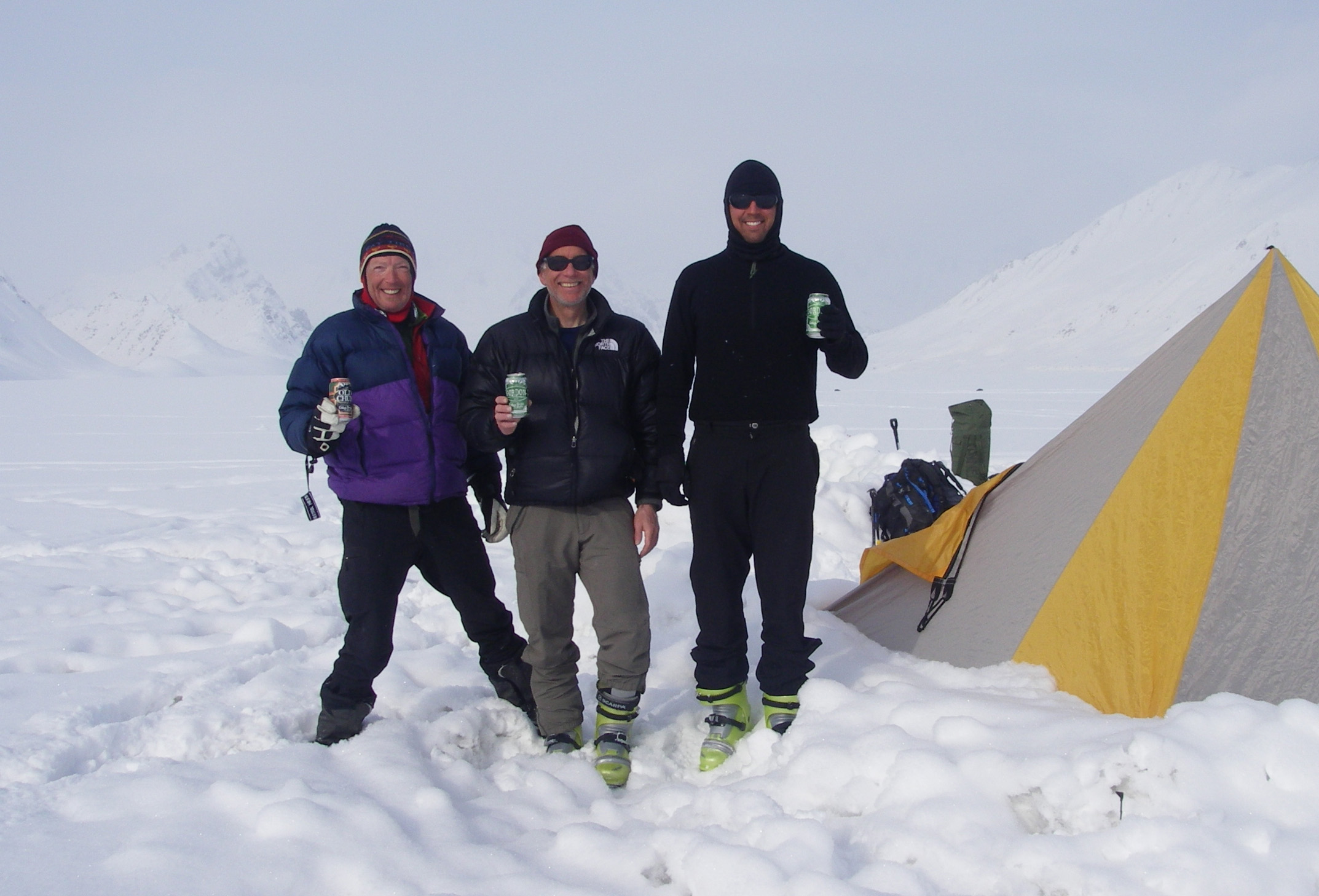 Jeff Lebesch with friends Peter Smith and Scott Fennell on the the Chickaloon Glacier in Alaska, enjoying a 'Gordon'

Instead of having a tribute beer last forever in the form of ‘Gordon,’ Oskar Blues will have to settle for ‘G’Knight.’

The Gordon Ale was originally released in 2003 by Oskar Blues Brewery as a tribute to long time Colorado native, and craft beer pioneer Gordon Knight. Knight was 52 when he died, fighting the Big Elk Fire in 2002.

Knight was widely regarded as one of the most influential people in the Colorado craft brewing scene and even bought his very first brewing equipment from Jeff Lebesch, the Founder and former owner of New Belgium.

Until this year, Oskar Blues had been releasing their imperial red ale under the Gordon label as a way to tribute their fallen comrade. However, in January, the San Jose, Calif. based brewery, Gordon Biersch, sent a cease-and-desist letter saying that the beer infringed on their trademark.

Dale Katechis was quoted as saying, “They just asked us not to use the name Gordon and we obliged.”

According to Katechis’ statement to the Daily Camera, Oskar Blues didn’t want to get into an argument with Gordon Biersch, even though the beer was named in tribute.

Knight bought his brewing equipment from Lebesch to start High Country Brewery in 1993. Lebesch was kind enough to recount the story to brewbound.

(At the time this story was published, Oskar Blues declined to comment directly to BB and Gordon Biersch could not be reached for comment)

Brewbound: Tell us the story when you first met Gordon Knight:

Jeff Lebesch:  I met Gordon after he responded to my add offering the first New Belgium brewhouse and support equipment for sale.  He had come to the house in Fort Collins where the first brewery was located in the basement.  Gordon was a small-framed guy, a bit nervous in his motions, very observant, somewhat introspective, and very engaging with his eyes and facial expressions.  We toured around the brewery and garage while I explained the use of all the brewhouse, malt handling, fermentation, chilling, filling, and storage equipment.  I explained that purchase of the equipment would include unlimited training on the operation of the system, and it included everything necessary to start up a small brewery, except keg and bottle filling equipment.  By the conclusion of the tour Gordon was fairly overloaded with information, and was wandering around the yard with his hands in his pockets and staring at the ground.  Finally with little hesitation, he yanked his hands out of his pockets, turned his palms to the sky, looked straight at me and said "why not, let's do it."  And so began Gordon's adventure in the brewery business.

JL: Though small in stature and tiny in his brewery operation, Gordon was big in the Colorado scene and loved by all.  His beers were great, and he was one of the first in the country to produce a pleasing super-hop beer.  Most memorable for me is his way of setting out to do his own thing in the brewing business; he was a leader in his own unique way and never a follower.

BB: Where were you when he died?

JL: Gordon died while piloting a helicopter and fighting a forest fire near Boulder.  That day I was hiking the nearby 13,000 ft. Mt Audubon with my 10 year old son and two of his friends, and I could see the fire.  I felt something very unusual and special while looking at that smoke cloud; it was some hours later I learned that Gordon had died.

BB: What would Gordon Do (in response to re-naming the beer)

JL:  It is disappointment that there is that trademark conflict.  WWGD?  I think he would just say "OK I'll change it" without protest or a fight, he would just want to get on with it and not have the conflict.

Rhinegeist to Launch in Chicago with Reyes’ Windy City Dis...