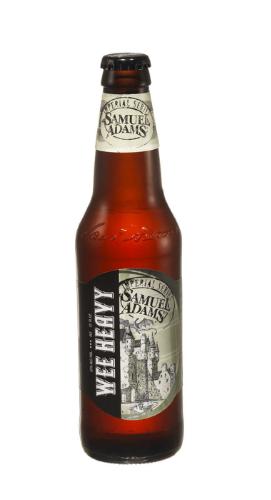 BOSTON – The brewers at Samuel Adams are proud to announce the latest addition to the Imperial Series line of full-bodied, robust beers.

Putting their own bold twist on the traditional Scotch-style ale, the brewers created Samuel Adams® Wee Heavy.  Inspired by the centuries-old ales of Scotland, Samuel Adams Wee Heavy derives its name from the storied Scottish practice of naming ales for their strength, from light to heavy.  Weighing in at 10 percent alcohol by volume, twice that of the average beer, Wee Heavy is intended to be savored and appreciated like a fine wine.

"As we did with the original three Imperials Series brews, Double Bock, Imperial White and Imperial Stout, we challenged ourselves to test the limits of a beer style and create a more intense version," says Samuel Adams founder and brewer Jim Koch. "Wee Heavy is not your traditional Scotch ale; we used bigger, bolder ingredients to boost the style's flavor."

Traditional Scotch ales and whiskies are known for their full-bodied maltiness and a combination of deep roasted flavor and earthy smoke character.  In creating Samuel Adams Wee Heavy, the brewers at Samuel Adams gave the style a unique twist, adding peat smoked malt reminiscent of the Scottish highlands, bringing subtle sweetness and earthy smokiness to this complex and satisfying brew. Balancing the strong malts, English East Kent Goldings and Fuggles hops were used to extend the earthy flavors into the hop character.

The earthy, smoked flavors in Samuel Adams Wee Heavy will play up the roasted flavors of pork dishes like carnitas or pork belly, and complement the grilled flavors of cedar plank salmon.  The brew also pairs well with traditional Scottish fare like pheasant or shepherd's pie. Wee Heavy's roasted malts are strong enough to stand up to strong cheeses and will bring out the chocolate flavors in desserts.

Alongside the rest of the Imperial Series brews, Samuel Adams Wee Heavy is now available nationwide at a suggested retail price of $9.99 per four-pack.  Other beers in the Series include:

Samuel Adams® Double Bock has become one of the Samuel Adams Brewery's most acclaimed beers over the past 20 years.  An enormous amount of two-row Harrington Metcalfe and Caramel 60 malts, half a pound per bottle, is used to brew this intense, rich lager.  This beer is close to the idea of beer as "liquid bread."  Its deep mahogany color, velvety smooth, rich yet slightly citrusy flavor and mouthfeel is a testament to the beer's balance.

Samuel Adams® Imperial White pushes the boundaries of the witbier style.  While showcasing the traditional witbier aromas and hazy appearance, it delivers a bigger mouthfeel and body. Brewed with 10 spices, a high quality blend of two-row Harrington, Munich and Metcalfe malts, malted wheat, and an abundance of Hallertau Mittelfrueh Noble hops, Samuel Adams Imperial White is an incredibly robust, refreshing beer with notes of orange and coriander.

Samuel Adams® Imperial Stout is a colossal beer inspired by centuries-old stouts.  These traditional stouts were first brewed by 18th century English brewers for the Russian Imperial Court of Catherine the Great.  Brewed with an abundance of East Kent Goldings hops and Caramel 60 and Munich malts, this beer is intense with full, rich flavors like dark chocolate, coffee and anise.