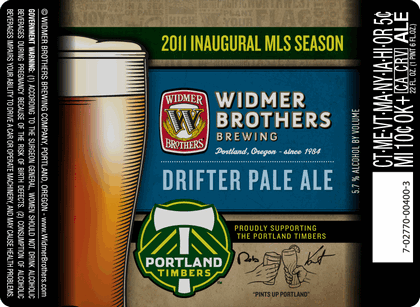 PORTLAND, Ore.— The Portland Timbers today announced that Widmer Brothers Brewing will be the exclusive craft beer partner with the Major League Soccer (MLS) team as it begins play in 2011.

As part of the multi-year Founding Partnership, Widmer Brothers will sponsor the new bar area located behind the south goal at PGE Park and is seeking fan input for the bar’s name. Timbers fans can submit ideas and vote for their favorite name on the Widmer Brothers Facebook page.

“We’ve been longtime fans of the Portland Timbers at Widmer Brothers, and we’re very excited to establish this partnership,” said Rob Widmer. “The Timbers are a great organization, and we’re happy to continue our support.”

Widmer Brothers’ 9,250-square-foot area is a prominent part of the renovation currently taking place at PGE Park. The south end of the stadium will feature four rows of fixed seating behind the goal in addition to an expansive area that will serve as a unique new gathering place for fans, offering a variety of food and Widmer Brothers beverage options and a distinctive vantage point.

“With a commitment to quality and craftsmanship and with roots firmly placed in Portland, Widmer Brothers is a terrific partner for the MLS Timbers,” said Merritt Paulson, president of the Timbers.