So, for our seventh anniversary, we’ll have not one but two new can releases.

Our newest DIPA is brewed with 5.5 pounds of hops per barrel, Bounding Main has a soft and pillowy mouthfeel, a gentle bitterness, and aromas of tropical fruits: mango, guava, citrus — all with a hint of dank in the background. Like many a stormy wind, Bounding Main will blow you away.

Not to be outdone, we’ve got Anniversary Ale 7.0, too!

A blend of seven of our absolute favorite hops come together at a rate of seven pounds-per-barrel to create a beautiful hop nirvana, blasting you in the face with a tidal wave of tropical and citrusy aromas. Layered throughout this celebratory feast of sexy hops, our Anniversary Ale 7.0 is dripping with notes of passionfruit, guava, and mangoes.

In addition, Ryan, Hank, and Mop Man have each chosen a flavor for a special one-off! Ryan came up with an orange crush-inspired brew: Summer Catch with Oranges. Hank devised Pickle Corrosion Kettle-Soured IPA, and Mop Man is all about The Bog Cranberry Shandy infused with lime zest.

Also, we’ll be giving away special koozies to the first 150 people through the door. Our BikeMS: City to Shore team will be in the house, with boardwalk games to raise funds and to offer a discount on the registration fee for the race.

Sounds like it’s going to be a great time! Let us know if you’ll be there, share the event, and invite your friends.

Here’s to another seven great years! 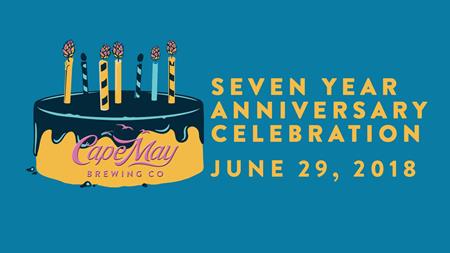