Just when we thought Night Shift Brewing and Mast Landing Brewing Company couldn't get any more rad, they went and collaborated on ANOTHER killer double IPA. Of course, the recipe is next level. Of course, the beer's name is a Happy Gilmore reference. And of course, we're throwing a big ol' release party at The Pint in Worcester.

That's Two Thus Far is majestically crafted double IPA all amped up with real apricot and mango. It will be making a marquee appearance at the Mass Fermentational - and we're keeping the party going with a 9 line post-festival tap takeover.

Mast Landing and Night Shift will each have four beers on tap alongside That's Two Thus Far, and we'll be toasting to another awesome event hosted by the Massachusetts Brewers Guild.

RSVP for updates on the beers that will be tapped! No tickets needed, pay as you eat and drink. 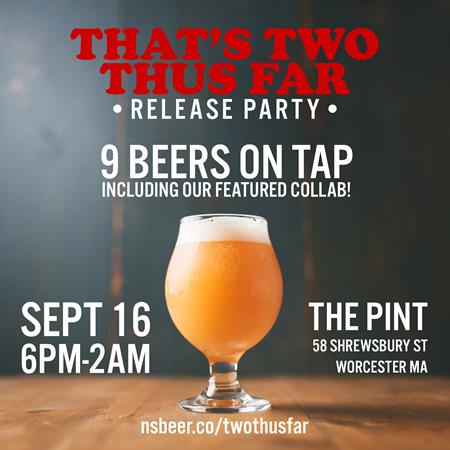