Asheville, NC | Hi-Wire Brewing is gearing up for the release of their anticipated Pulcinella Russian Imperial Stout, an illustrious stout aged in oak barrels for 10 months. To celebrate this release, they will host their 2nd Annual Stout Bout Festival at their Big Top Production Facility (2 Huntsman Place, Asheville, NC) Saturday, November 12 from 1:00pm-5:00pm. Admission is $8 and includes glassware and two beer tokens. Additional beer tokens will be $2 each.

Stout Bout blends a traditional beer festival with a blind tasting. From 1:00pm-3:00pm attendees will be able to taste as many beers as they wish and cast a vote for their top two favorite stouts. At 3:00pm voting will close, at 3:30pm winners will be announced, and all beers will be revealed to attendees. If beer there is beer left, full pours will be made available to customers for purchase.

About Pulcinella Russian Imperial Stout
Pulcinella Russian Imperial Stout is released by Hi-Wire Brewing once-a-year in November. Named after the historical theatre figure who is said to have influenced the modern clown, this beer spends 10 months in Napa Valley Zinfandel, Kentucky bourbon, and St. Croix dark rum barrels. The complexity of the barrels impart big roast and molasses flavors that are paired with notes of chocolate and vanilla. Bottles of Pulcinella will be available for sale at the event for $12 with a limit of 6 bottles per person. 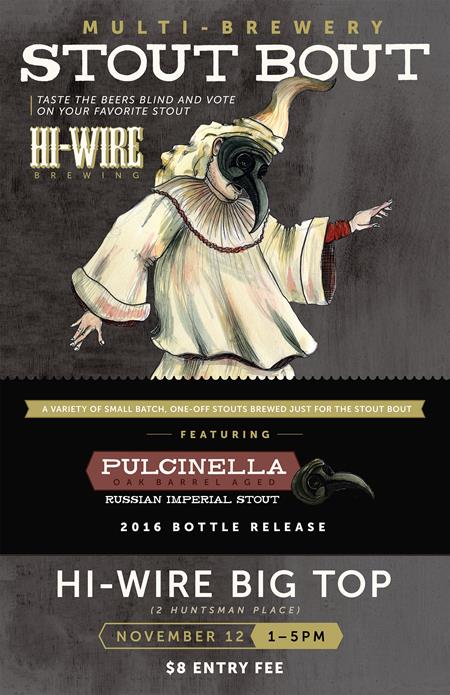