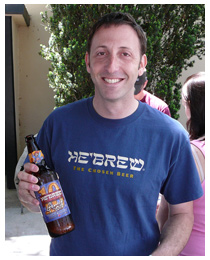 Brewbound is pleased to announce that Shmaltz Brewing Co. founder Jeremy Cowan will join the Brewbound Craft Beer Session as a presenter. The event will take place on June 5 in New York City.

Starting in 1996 by self-distributing 100 cases from the back of his Grandmother’s car, Cowan has been able to grow Shmaltz into a brand that is now sold in 30 states and is on pace to produce 12,000 barrels this year and has become notable for its loose, humorous branding.

A devoted contract brewer, part of Cowan’s presentation will discuss the challenges and opportunities conferred on a startup brewer by the contract brewing process. Cowan will also provide guidance concerning the decisions contract brewers face when determining a distribution strategy and the challenges that are unique to that style of production as they look to grow.

The Brewbound Craft Beer Session will be held on June 5th at the Metropolitan Pavilion, a meeting and event space at 125 W. 18th Street in Manhattan. The event is co-located with BevNET Live, a two-day forum for beverage entrepreneurs, suppliers, distributors, retailers and investors.

Jeremy Cowan is the founder and proprietor of Shmaltz Brewing Company – the world’s smallest, largest, and most award-winning Jewish Celebration and Sideshow Freak beer company. Born in West Los Angeles into a second-generation Californian Jewish family, Cowan grew up in the suburbs of San Francisco. After graduating from Stanford University with a degree in Humanities, he embarked on a series of job stints in the arts and the bar and beer world until starting an experimental microbrew project called HE’BREW: The Chosen Beer in 1996. Drawing inspiration from pioneering craft breweries, local artists, popular culture, and a couple of transformative trips to Israel, Cowan created HE’BREW Beer as a celebration of the American Jewish experience in the form of sophisticated and inventive craft beers. In 2007, Cowan launched Coney Island Craft Lagers, a second brand that explores the creative potential of lagers and invokes the iconic imagery and sideshow culture of Coney Island in Brooklyn, New York. Shmaltz Brewing Company now distributes HE’BREW Beer and Coney Island Craft Lagers in over 30 states, Canada and Australia.