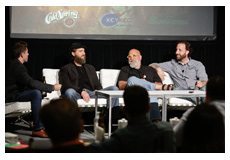 Craft beer industry members converged on New York City on Tuesday, June 5th for the Brewbound Craft Beer Session, a full-day business conference and networking event that was attended by over 100 brewers, distributors and other beer industry professionals.

Following Koch was Dogfish Head’s VP of Sales, Adam Lambert, who discussed selling strategies for moving beyond the local bottle shop and into larger chain accounts. Lambert was then joined on stage by Boston Beer’s National Channel Manager, Joseph Kaczynski and Steve Letterle, a beer and wine merchandiser managing over 180 Stop & Shop locations. The three spoke on the importance of craft in the grocery and convenience channels, the future of craft in those channels and sell-in strategies for small brewers looking to enter larger chains. 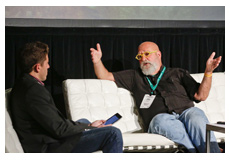 Attendees also heard from Greg Avola, the co-founder of Untappd, who presented on the importance of social networking as a way to connect with consumers. Jim Schembre, the GM of World Class Beer, also discussed social networking during his presentation on the three-tier system and the rise of craft distribution networks.

Julia Herz, the Craft Beer Program Director for the Brewers Association provided some interesting stats on the tendencies of beer drinkers and what occasions they choose to consume craft. Brad Scholtz, the Managing Director for Scott Financial Partners answered questions on raising capital and why investors are interested in the segment.

Mike Schneider, a Senior VP with Allen & Gerritsen gave a spirited presentation on the importance of brand identity with a comparison between Boston startup Backlash Beer Co. and Anderson Valley Brewing.

The day ended with beer sampling and a casual discussion on the future of the craft beer industry in the eyes of the brewers – Greg Koch, Alan Newman and Jeremy Cowan.