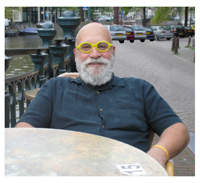 In his 17 years with Magic Hat, Newman built the brand from startup funding into the 9th largest  craft brewery in America before the company was sold to North American Breweries in 2010.

As a featured speaker at the Brewbound Session, Newman will discuss the circumstances that allowed Magic Hat to succeed, what key decisions he had to make in order to grow and what he is trying to accomplish through Alchemy & Science.

The Brewbound Session will be held on June 5th at the Metropolitan Pavilion, a meeting and event space at 125 W. 18th Street in Manhattan. The event is co-located with BevNET Live, a two-day forum for beverage entrepreneurs, suppliers, distributors, retailers and investors.

The Brewbound Craft Beer Session is a business conference addressing the topics that most directly impact the decisions craft brewers are faced with as they look to grow their brands. The event focuses on the business side of  craft, offering brewers a unique opportunity to learn from and network with industry experts.

Over the past 30 years, Alan Newman has formed three companies in entirely different industries. Each became a leader in its category.

The first, Gardener’s Supply Company, caught a boom in mail order services. The second, Seventh Generation, rode the wave of interest in environmentally friendly products. The third, Magic Hat Brewing, which he started in 1993, tapped into the soaring demand for high quality, locally-brewed craft beers. In the 17 years that Alan led Magic Hat it grew from idea to the 9th largest craft brewery in America. In fact, Alan made a national impact with all three of his businesses without ever having to leave his adopted hometown of Burlington, Vermont.

After exiting Magic Hat in 2010, he felt he had a clean slate. Alan started looking for a new adventure. He looked at businesses from wood stove manufacturing to Vermont clothing manufacturing to potato chips.  The only rule he had was that it certainly would not going back into the craft beer business.

But Alan continues to learn to say, “Never say never”, because in October 2011, he and a long time previous employee announced the creation of Alchemy & Science, which they describe at an “incubator” for craft breweries. As a subsidiary of The Boston Beer Company, Alchemy & Science is giving Alan a chance to work with his old friend Jim Koch, brewer of Samuel Adams Boston Lager.

Never one to rest on his laurels, Alan immediately began traipsing around America’s beer capitals, looking for opportunities to bring world class beers to thirsty beer lovers. In fact, less than two months after the announcement of the creation of Alchemy & Science, he announced his first project, Angel City Brewing in Los Angeles. Alan is currently managing the renovation of this brewery for a spring 2012 opening and continues to look for additional opportunities.