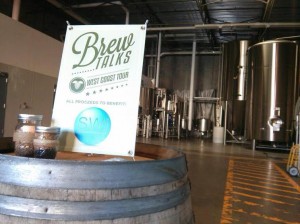 It’s no secret that Oregonians have quite the affinity for locally produced craft beer.

Of the 1.4 million barrels of beer the state’s brewers produced last year, 500,000 were sold to Beaver State drinkers alone.

During the first stop of the Brew Talks West Coast Tour, which was held at Portland’s Breakside Brewery on Monday, a panel of industry experts weighed in on the various factors that have helped craft beer thrive in “Beervana.”

Breakside’s founder Scott Lawrence joined Brady Walen, the Widmer Brothers brand manager and Mike Gorman, the president of Rev. Nat’s Hard Cider, in a discussion on the state of craft beer in Portland, Ore. They touched on everything from industry “camaraderie” to marketplace rotation in assessing the state of the industry now, and more importantly, going forward.

To start, however, Lawrence praised the state for not putting up roadblocks that would effectively stifle growth of the industry, despite a “pretty high” tax rate.

“They’ll give a liquor license to almost anybody,” he said. “Here you can get a license easily. I tend to think as a business owner, our taxes are pretty high. But there aren’t obstacles, not any roadblocks the city puts in our way.”

A lower barrier to entry means that many startups are able to get off the ground quicker in Portland, Ore.

But despite the continued surge of new category entrants, competing businesses in Beervana are still quite collegial, the group said. In fact, while describing how friendly the atmosphere really is, Lawrence admitted that he would, in fact, turn down a new account looking to sell Breakside’s brews if it meant chipping away at the business of some his peers.

“There are some breweries I would say no for,” he said, noting that he tries not to pick off tap handles from other breweries in his wholesaler’s portfolio.

Lawrence said there’s no reason to poach accounts from his friends. After all, craft is doing just fine in Portland. According to IRI, a Chicago-based market research group, craft beer — including so-called “crafty” brands like Blue Moon, Shock Top and Leinenkugel — accounts for 41 percent of total sales.

But that doesn’t mean that elbows aren’t sharpening, however.

“Let’s not kid ourselves,” interjected Walen. “It’s still a business.”

“Flooring the big domestic beers — we busted through that five years ago,” he said. “There’s going to be a time when [retailers] are not going to let you see Budweiser… when is the day when you’re not met with a Budweiser neon in the front window?”

Breaking through that barrier, said Gorman, has helped to accelerate growth, something Oregon—and Portland specifically—is a bit ahead of the national curve on.

“Portland’s an anomaly,” said Walen. “We’re talking about 41 percent [market share] in Portland, Oregon — everywhere else in the country it drops off dramatically.”

Nationally, however, Lawrence believes the craft industry could still double in size without compromising the principles that have helped the industry blossom in the first place.

“The craft industry in the U.S. is still less than 10 percent,” he said. “If we got to 20 percent, that’d be amazing. I’m not trying to have a cruise ship. Maybe some of us are, but I think we can make awesome lives and enrich the lives of our employees by making awesome beer.”