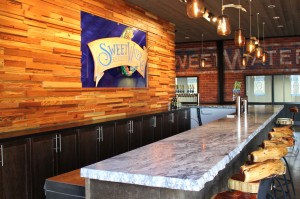 The Brew Talks Southeast Tour is officially underway and more than 200 attendees plan to join us throughout a week-long trip that will make stops in Atlanta, Georgia, Durham, North Carolina and Lexington, Virginia.

The first of three Brew Talks is being held at SweetWater Brewing in Atlanta and will feature two panel discussions on the business of craft beer. For those unable to attend the Brew Talks event, we’ve made available a free live video steam, which begins at 5:30 P.M. EST on Monday, Feb. 24.

The evening’s feature presentation will explore SweetWater’s regional brewery business model. Brewbound editor Chris Furnari will ask SweetWater’s co-founder Freddy Bensch and vice president of sales, Dave Guender, to explain the strategic decisions that have helped the company grow into a top-20 U.S. craft brewery. Bensch and Guender will make the case for the regional brewery approach and discuss how SweetWater has built a strong flagship brand, 420 Pale Ale, while still balancing its sales with a diverse portfolio of seasonal and limited releases.

Prior to that conversation, a second panel discussion featuring Jason Ingram from Left Hand Brewing, Wes Anderson from Savannah Distributing and Russell Farr from Greenco Beverage Company will look at the retail environment for craft beer in the Southeast.

Sponsored by Crown Beverage Packaging and VicinityBrew, the Brew Talks Southeast Tour is a FREE, traveling meetup series that aims to provide craft brewers with access to valuable insight into the branding, marketing and distribution of craft beer. Launched in 2013, Brew Talks are designed to provide craft brewers, distributors and retailers the opportunity to come together in beer friendly locales and have in-depth discussions on the business side of craft beer.