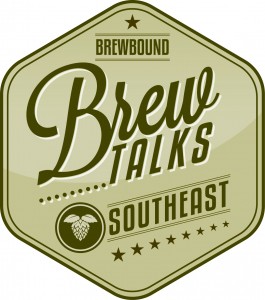 The first stop during the week-long tour which will take place on Monday, February 24 at SweetWater Brewing in Atlanta. The live broadcast will take begin at 5:30 P.M. EST and can be accessed by visiting http://www.brewbound.com/livestream.

Brew Talks — a free, educational and networking series that aims to provide craft brewers with access to valuable insight into the branding, marketing and distribution of craft beer — will make stops at three Southeast breweries during the week-long tour. Each stop on the tour will feature panel discussions with well-known craft beer industry professionals. Notable participants include:

Launched in 2013, Brew Talks are designed to provide craft brewers, distributors and retailers the opportunity to come together in beer friendly locales and have in-depth discussions on the business side of craft beer.