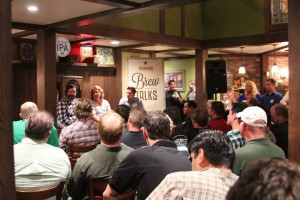 A packed house looks on at Brew Talks Los Angeles

Brew Talks — a FREE, traveling educational meetup series that aims to provide craft brewers with access to valuable insight into the branding, marketing and distribution of craft beer — will make stops at three breweries during the week-long tour, which kicks off on Feb. 24 at SweetWater Brewing in Atlanta, Ga.

Two other Brew Talks events will also be held at Fullsteam Brewery in Durham, N.C. on Feb. 26 and Devils Backbone Brewing Company in Lexington, Va. on Feb. 27.

At each location, Brewbound editor Chris Furnari will moderate discussions on the business of craft beer with local brewers and distributors. Official speaker announcements will be made this week.

Launched in 2013, Brew Talks are gatherings designed to provide craft brewers, distributors and retailers the opportunity to come together and have in-depth discussions on the business side of craft beer. The FREE events serve as an educational and networking opportunity for beer industry professionals and all events are broadcast globally via a free live stream.

Brewbound will host two additional Brew Talks tours throughout 2014. The official dates, times and venues will be announced in the coming months.

The Brew Talks event series provides beer industry professionals with an intimate opportunity to network and discuss the business of craft in beer-friendly locales. Prior discussions have occurred in San Diego, Portland, Ore., San Francisco, Seattle, Wash., Boston, Los Angeles, Portland, ME, Washington D.C. and Chicago. Those talks have focused on selling craft beer in key markets, the decision-making process behind brewery expansions, packaging decisions for craft brewers, and the challenges of earning local tap handles. All Brew Talks events are broadcasted globally via a free live stream for those unable to attend.